客随主便 (kesuizhubian) "A guest should suit the convenience of the host"

A month ago or so (yeah it’s been a while, so this post is longer) was 春节 (chunjie “Spring Festival”). 春节 is one of the most important holidays in China and almost everyone returns to their parent’s homes in the countryside. Big cities like Beijing nearly become ghost towns. It’s a week of fireworks, 白酒 (baijiu “white wine” but it’s actually a really strong liquor), 麻将 (majiang “mahjong”), big feasts, and spending time with loved ones. It’s an exciting occasion - for everyone except the foreigners. Most of the other foreigners I talked to had planned vacations in other countries during the festival. So I was left alone in Beijing, a poor foreign boy whose friends had all gone home and whose favorite places to eat are were all closed.

Convenience stores stay open and luxury restaurants stay open so I passed the festival flipping between instant noodles for lunch and expensive feasts for dinner. With my extra free time I saw some of the sights; I went to the 圆明园 (yuanmingyuan “Old Summer Palace”) and the most famous 庙会 (miaohui “Temple Fair”) at the 地坛 (ditan “Earth Temple”). Beijing was peaceful and still for the first time in my experience, and I actually quite enjoyed it.

Before going to the temple fair I asked in a language exchange group that I frequent if any of the foreigners who might still be in Beijing wanted to come with. They had all left, so I went on my own, but the organizer of the group reached out to me privately and asked if I wanted to join him for a dinner at his place the next day. I accepted graciously as best I knew how in Chinese and he told me what time and where. (I asked my friend about accepting invitations later. In English/America we’ll say something along the lines of “Wow that sounds great, I’m looking forward to it!”, but in Chinese it’s apparently common to just say “ok, what time would be convenient for me to come over?” with little to no excitement required.)

I knew that it would be polite to bring a gift, but I wasn’t sure what. I remembered reading online that bringing fruit was good, but the grocery stores weren’t open, only 7-11. The 7-11’s here in Asia are advanced far beyond what we have in America, but even they don’t have fresh fruit. So before heading over I bought a bag of sunflower seeds (a very popular snack) and self-satisfiedly continued on my way.

The 圆明园 (yuanmingyuan "Old Summer Palace"). It's meant to stay cool in the summer, which means it was even colder in the winter.

It was only upon entering my host’s home that I realized I have no idea how to be a guest in China. Basic human decency stays the same, but in a world where putting your elbows on the table is considered rude in some households it’s always easy to accidentally cross some line. For example, in most of East Asia sticking your chopsticks straight up in your food is considered incredibly rude, as offerings to the dead are presented with chopsticks sticking straight up and out of the dish. My Dad, who I told this whole tale to the next day over the phone, told me that he committed the particular error on his first day in Japan 😂

I knew, at least, that one needs to take off their shoes at the doorway. I began to pull them off and my host stopped me, insisting that there was really no need. I paused, shoe halfway discarded. I remembered back to when my Chinese teacher spent half of a class explaining how Chinese people will often say one thing (“I don’t have the habit of smoking, but you feel free to smoke”) and mean another (“if you smoke I will be displeased”). I examined my host’s feet and found them shoeless. In my indecisive panic I left mine on.

庙会 (miaohui "temple fair"). They sell all sorts of food and knickknacks here, and also have some live performances. Very popular among the locals.

I presented (with only a touch of pride) the gift I had brought. He accepted it and set it aside with little ceremony - I wasn’t worried as I knew that it’s considered impolite to care too much about a gift lest you appear greedy (unlike in America, where it’s the host’s responsibility to fawn over whatever the guest brings them). But just to be sure I checked with my roommate when he got back the next day. He said that fruit is a great option to bring as a gift, maybe chocolate, perhaps wine or juice, but the absolute worst is bringing something boring like sunflower seeds, especially if they’re not a good brand.

I sat in the chair I was offered and looked around to confirm my suspicion that I had been the only person invited. I chatted with my host and learned that actually this was his parent’s place, and I would be eating with his parents, his kid, his wife, his wife’s father, his wife’s sister and her kid. So I was actually intruding on a family dinner. I then further learned that this day 初五 (chuwu “fifth day of the new lunisolar year”) was a very important day during the spring festival. Imagine being invited to dinner, showing up, and realizing it was actually Thanksgiving day and your host’s entire extended family was present. That was pretty much what I had jumped into.

庙会 (miaohui "temple fair"). Here you can see some of the toys and other goods hanging in the stalls.

In America (and many other cultures, however I will only speak for the one reference point I have) a meal is a time to talk as well as eat. In my, admittedly limited, experience in Beijing, when food is served people shut up and eat. I’ve heard that there’s a phrase some parents tell their children: “食不语 (shibuyu)” or “don’t talk when eating”. No one has ever explicitly chided me in this way, but I tend to find that if I try to start a conversation during a meal time I’m the only one talking. Conversation seems to be saved for before and after eating.

As a guest, do I try to show curiosity, as would be polite in America, and keep conversation moving? Or do I keep my mouth shut and only speak when spoken to? The language barrier exacerbated all these issues. My host and his wife spoke English well, but no one else at the table used it. I was asked a couple of questions during dinner, but in the end Americans are allergic to silence and once the pauses grew unbearable I would awkwardly break the sound of chewing with a not-too-intrusive question for my hosts. 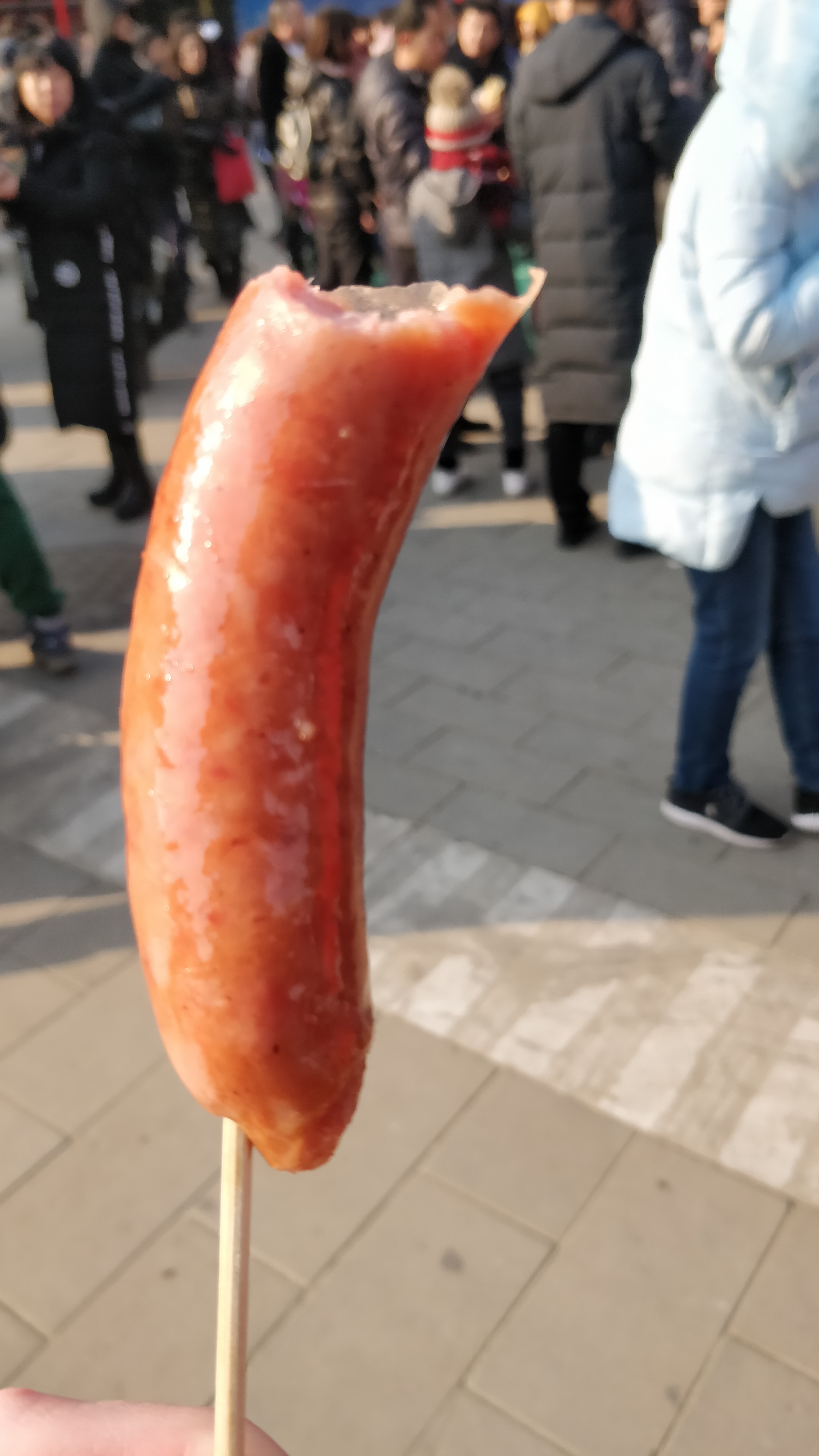 Some of the foods I tried at the fair. This is a 香肠 (xiangchang "fragrant sausage").

This was... something. I'm not sure what the name was, but the person who sold it to me complimented my Chinese 😁

My host’s mother apparently spent over four hours preparing all the 饼 (bing, usually translated as “pancake” but closer to a fried tortilla) that we used to make the 春饼 (chunbing “spring rolls” but not like the ones you get in an American-Chinese restaurant), but with little to no conversation dinner was wrapped up in twenty minutes flat. The dishes were cleared and everyone scattered back to their respective rooms, leaving just my host and I. Among friends in America this is when a bottle of wine or a platter of crackers would be procured and the post dinner conversation would begin. However I was not a friend, I was a foreigner who had pity taken on him during his isolation, and I saw no bottle of wine forthcoming. But perhaps that was a wrong assumption I had carried over from my own culture…?

The after dinner activity turned out to be some picture taking. People here in Beijing are used to foreigners so I only get people staring at me every once in a while (because I am so handsome, I presume). But my host’s wife is from a small village somewhere in rural China, so her side of the family all wanted to take a picture with the foreign boy 😂 She was very polite and asked me if I would be ok with it first. I never got a look at the final product, but I like the idea of people showing off photos of me in a small village out in rural China 😆

My host and I chatted a bit about Chinese New Year. He told me how it used to be more exciting - back before the government banned fireworks in the cities walking through Beijing apparently used to be similar to walking through an active combat zone. People set off fireworks unceasingly for the whole week. And back then China used to be less affluent, so the Chinese New Year was a rare time for him and his family to eat meat. Now they can eat meat all the time, so the New Year has lost some magic. On the one hand, I felt like I missed out on the exciting fireworks, on the other hand it sounded like it would have been nigh impossible to sleep…

A closer look at some of the wares in the booths. Fake flowers!

But I was getting the feeling that it was time for me to go, so I went to use the bathroom. When I emerged my host was standing and made no move to sit back down - as good a sign as any he wants me out. So I made my excuses and donned my coat and he did not protest. I walked out into the twilight bewildered and not knowing what - if any - faux pas I had committed, and how grave they were. Many people in America don’t give much weight to manners so long as it is clear that their guest’s intentions are not ill, is China the same? I had no clue. It was not quite seven so the whole thing had lasted not even two hours.

I am, of course, grateful to my host for showing sympathy in a city where it is rarely given, and this post is in no way meant to discredit his kindness. I thought I was ready for the culture shock but every day I seem to be surprised by something new. I probably should have inquired with my roommate beforehand for at least a basic idea of what’s polite and what’s not, but you have to remember that I am the type of person that didn’t even check if his hotel was open 24 hours a day and almost spent his first night on the street.

If anyone is planning their own trip to China and happens to be invited to someone’s home here’s what my roommate told me when I asked him after the fact:

I learned my lesson and the next time I was invited out (to a steakhouse!) I sat down with a fellow intern and grilled him about what I should bring, how I should act, what I should ask, etc. etc. He entertained my questions and told me to relax and that he was sure it wasn’t that big a deal. Well I bet he would be traumatized too after being invited without warning to a Thanksgiving in America…