The Warzone of India

I woke to the pitch black of my windowless room, the AC rattling along, doing it’s best to fight the oppressive Asian subcontinental heat. Rubbing my eyes I checked the time - 9:30. Turning on the lights and picking up the bedside phone I ordered something tasty sounding off the breakfast menu. I dressed and the food arrived along with the absolute delicacy that is masala chai tea. I sat and ate, enjoying the precious few moments of peace I would be getting that day. Then, I prepared for war.

Double checking my phone’s charge I slid my extra battery pack into my back pocket. I plugged my conspicuously bright pink headphones into my phone and wound the wires around the backs of my ears before slotting them into place so as to more firmly secure them. I counted out a reasonable sum of money for the day’s expenses and tucked the rest under a pile of dirty laundry deep in my suitcase. And finally, slipping on my shoes, I started a playlist that I had carefully picked out to be upbeat but soothing, something you could sink into and away from the world, but still kept you peppy and energized. Bumping the volume way up I strode out the door and onto the streets of New Delhi.

India was by far my most difficult traveling experience.

Early on I developed a rule: “if they speak English they only want your money.” Every day I was approached by people in the streets, chatting with me, saying they only wanted to “practice their English.” At first I would entertain these conversations, but after the third or fourth time I had someone try and direct me to their tourism agency, or upsell me a train ticket, or try to convince me to come to their shop or restaurant, I just resorted to pretending I couldn’t hear them through my headphones. 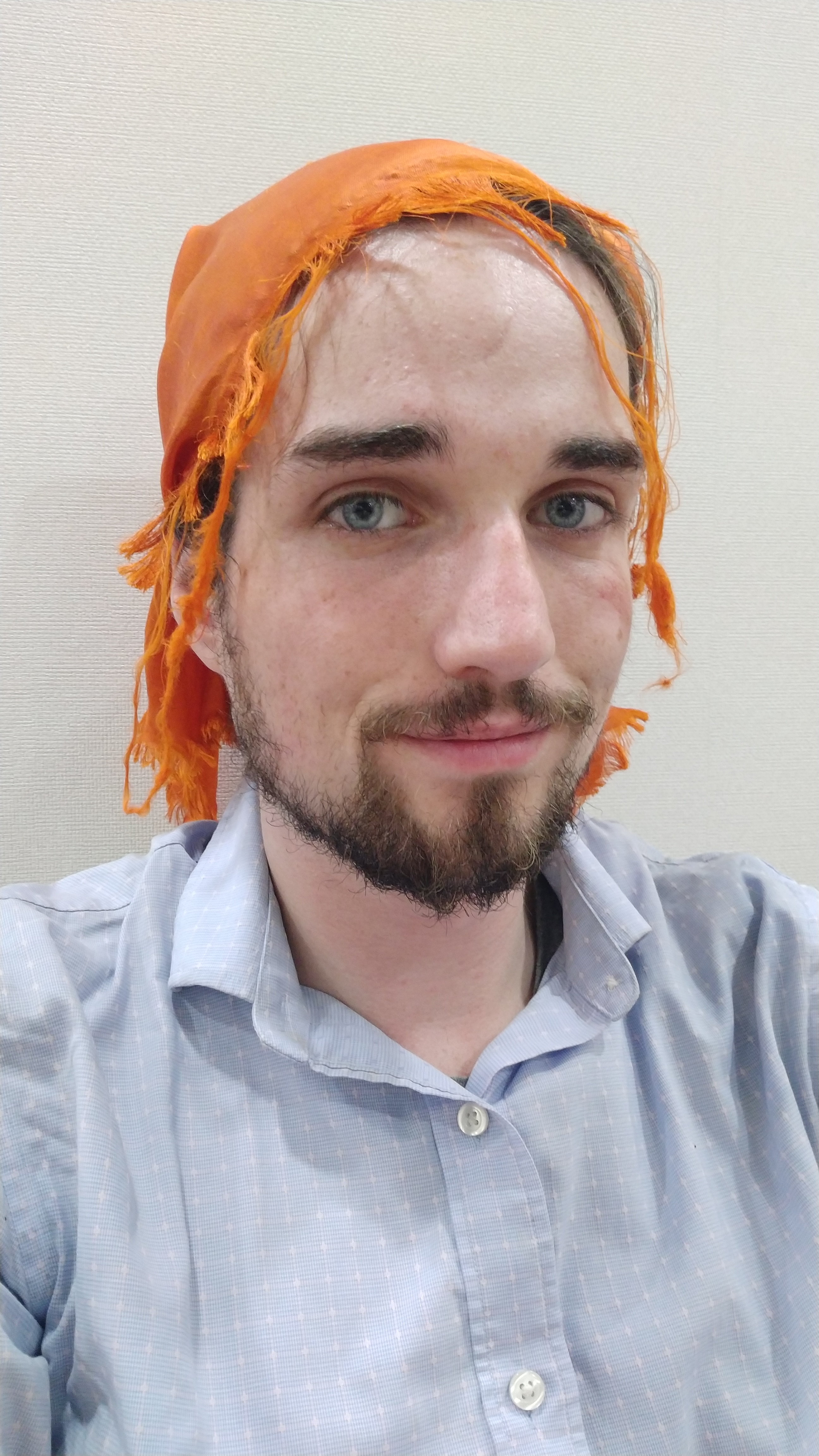 I visited a Sikh temple where you have to cover your hair. I actually had a great experience there - a fluent English speaking Indian guy was an exception to my rule as he was super friendly with no strings attached. He gave me a tour of the place and helped me join in on the free food and tea the temple gives away to thousands (!) of people daily. 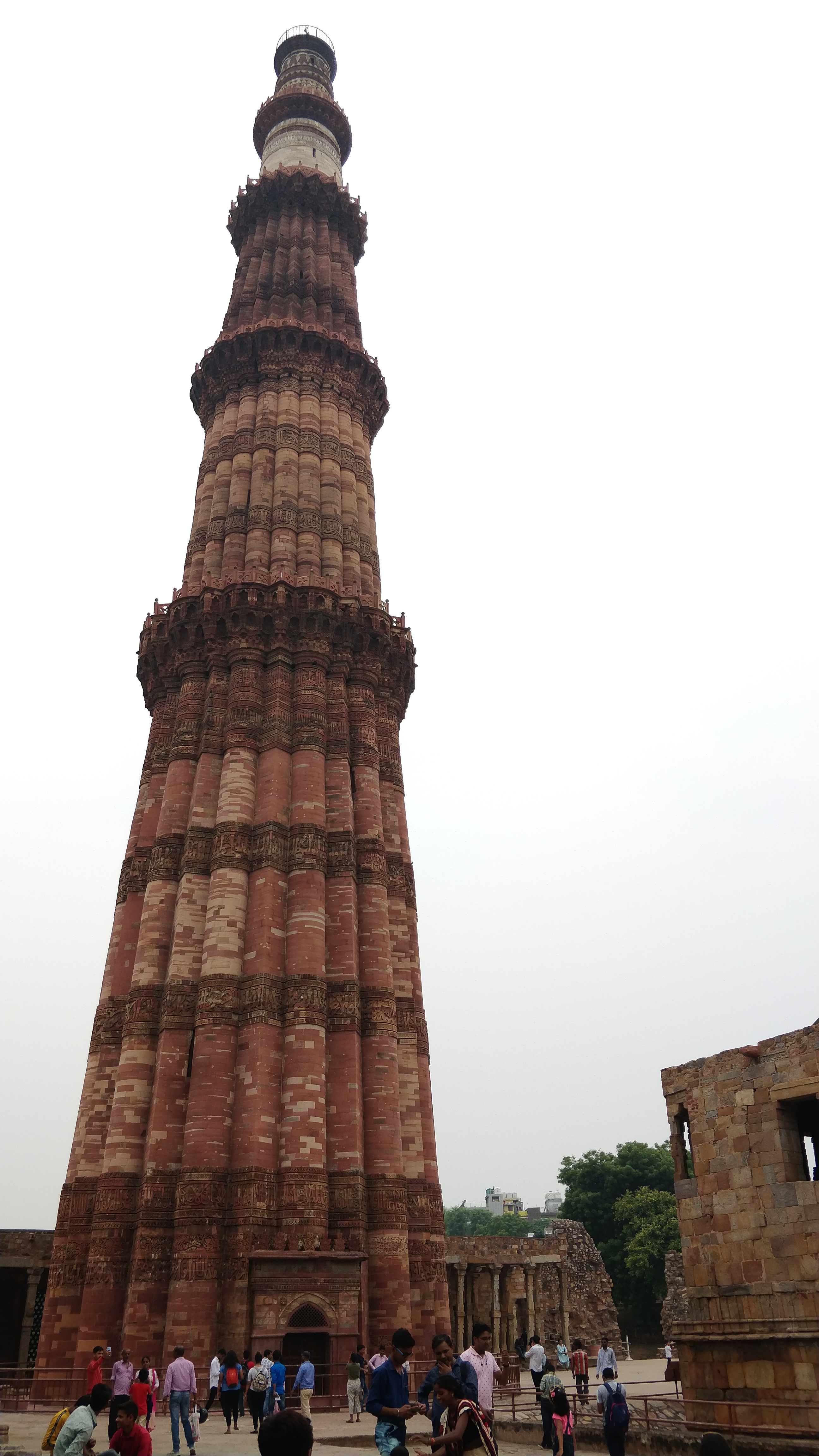 The Qutub Minar. They used to let people go up, but after a panic stampede caused by an electrical failure in which several people died they closed off the stairs.

I once had a popsicle stand man short me ₹10 (¢14) in change. When I pointed out the discrepancy he just stared at me in exasperation and rolled his eyes at being caught, languidly handing over the final coin. 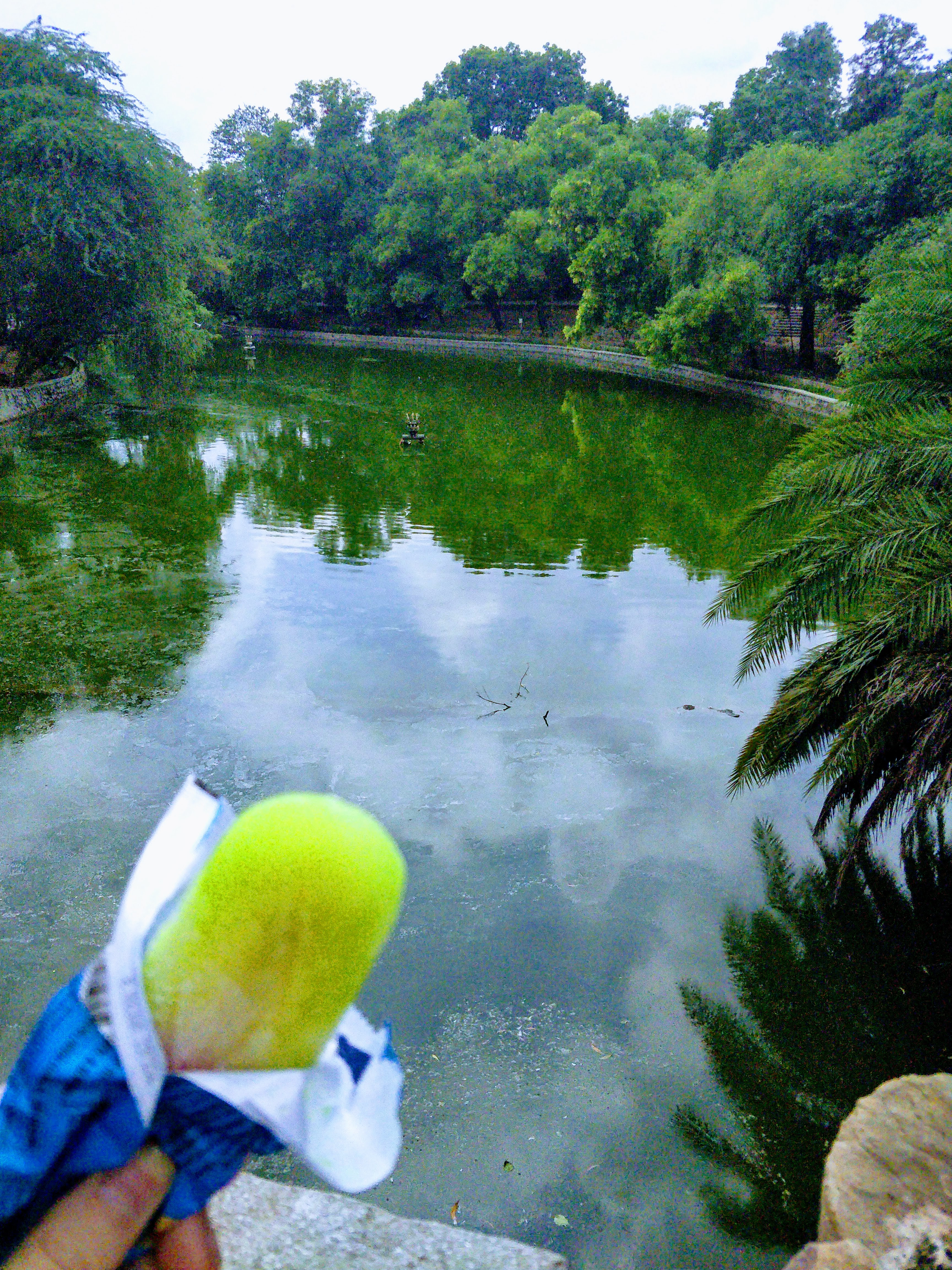 Bargained hard for this.

The worst of it was my train ride. Not the ride itself; I bought second class air conditioned tickets so that was pleasant enough. The trouble was at the station. I had done my research and found a way to get my tickets online, circumventing the need to buy with a possibly dubious tourism agency. My train was at 6 AM so I arrived at the station at 5:30 AM and started heading towards the bridge to the platforms. Two Indian men dressed in uniform spotted my tourist-looking face and came over to assist.

“Which train are you taking?” they asked.

“Uh… The one to Varanasi, platform one…” I responded groggily.

“Ooooh, Varanasi. Ok, first you need to go inside.”

“No no, you need to go inside and ask at the front desk, to ask about the train” they insisted “because the track might have been flooded, the train might be cancelled, it’s the monsoon season you know?”

And that was what did it. I grabbed my bags and pushed passed them, saying “no, I’ve been here before, I’m going to go up the bridge” and they didn’t come after me. Scammers will always try and tell you that your destination had been burnt down, or gone out of business, or closed due to holidays, and in particular they like to say it’s been flooded by the monsoon rains. And if I had been a little more clueless, a little less prepared, and listened to the men in uniform and gone inside to inquire about my train at the front desk, I would have been informed by the friendly Indian clerk that yes, my train had been cancelled, but I could buy a last minute ticket for a later train going to the same location at only a small markup. And a portion of the scam money would have gone to the fake personnel who directed me to the desk, a portion to the ticket salesperson, and a portion to the real guards who are supposed to step in and prevent exactly this from happening…

But they didn’t get me this time. I crossed the bridge and found my train and boarded and sat and fumed for the first hour of my journey. “How mean!” I kept thinking to myself “to pick me out because of the color of my skin when I’m already stressed about making my train on time and it’s this early in the morning… just how mean!” 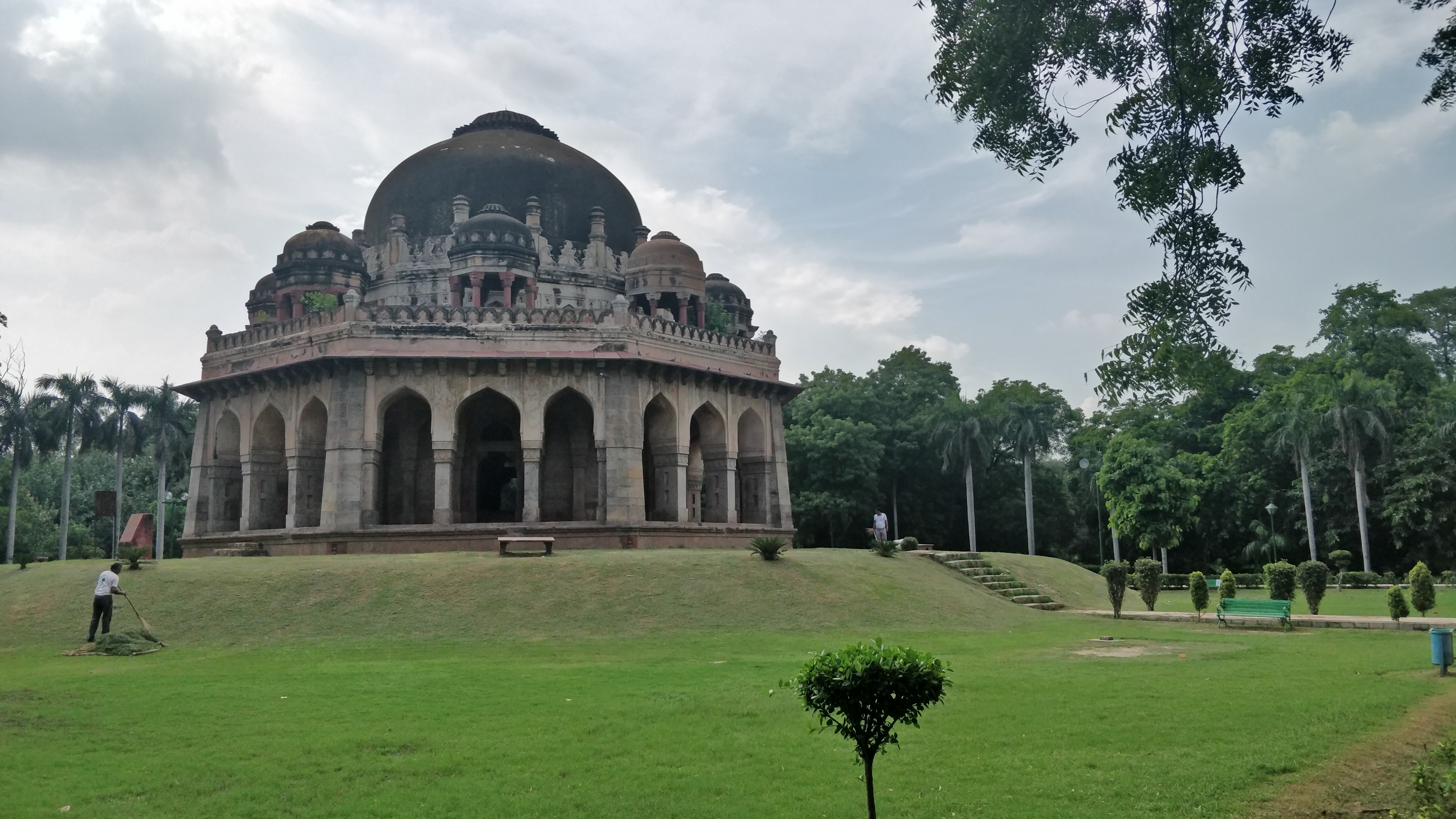 An ancient tomb of an ancient king I found wandering through the Lodhi Garden in New Delhi.

As I understand it, the situation in India is actually pretty similar to the situation in China 10 or 15 years ago. China also used be rife with similar scams - a friend told me her own personal experience of a swindler at a train station convincing her that she had missed her train and selling her a bus ticket instead. But nowadays in China foreigners are treated more as a novelty than a bucket of cash, and besides the normal price hikes in touristy areas I never really experienced any true scams. Nothing like the men at the train station in India.

My theory is that it’s correlated with the rise of the middle class. China has seen an explosion in their middle class in the last decade, and people simply aren’t as desperate. But India hasn’t seen the same economic success with a similarly sized population - and in tighter situations people resort to deceit. I’m hoping that as India gains economic power the situation there will get much better for tourists - but that won’t be for years.

A common form of transportation is an auto-rickshaw - or an auto for short. Small, boxy little vehicles they swarm the streets and are usually both cheaper and more convenient than a taxi. Just kinda loud and bumpy!

Beyond the stress from the constant defensiveness I developed, India was simply loud. Besides the people (and animals) that were shouting or mooing there was the honking that never stopped. People drive cars and motorcycles and mopeds and rickshaws and hitting the horn is often used instead of hitting the brake. People honk when they’re going down small alleys, they honk when they’re changing lanes, they honk when other people are going too slow, they honk at an animal when it’s in the way, sometimes they honk for no damn reason at all, just holding down the horn as they blast their way down a totally clear and empty street.

The music was the only way to shut it all out. 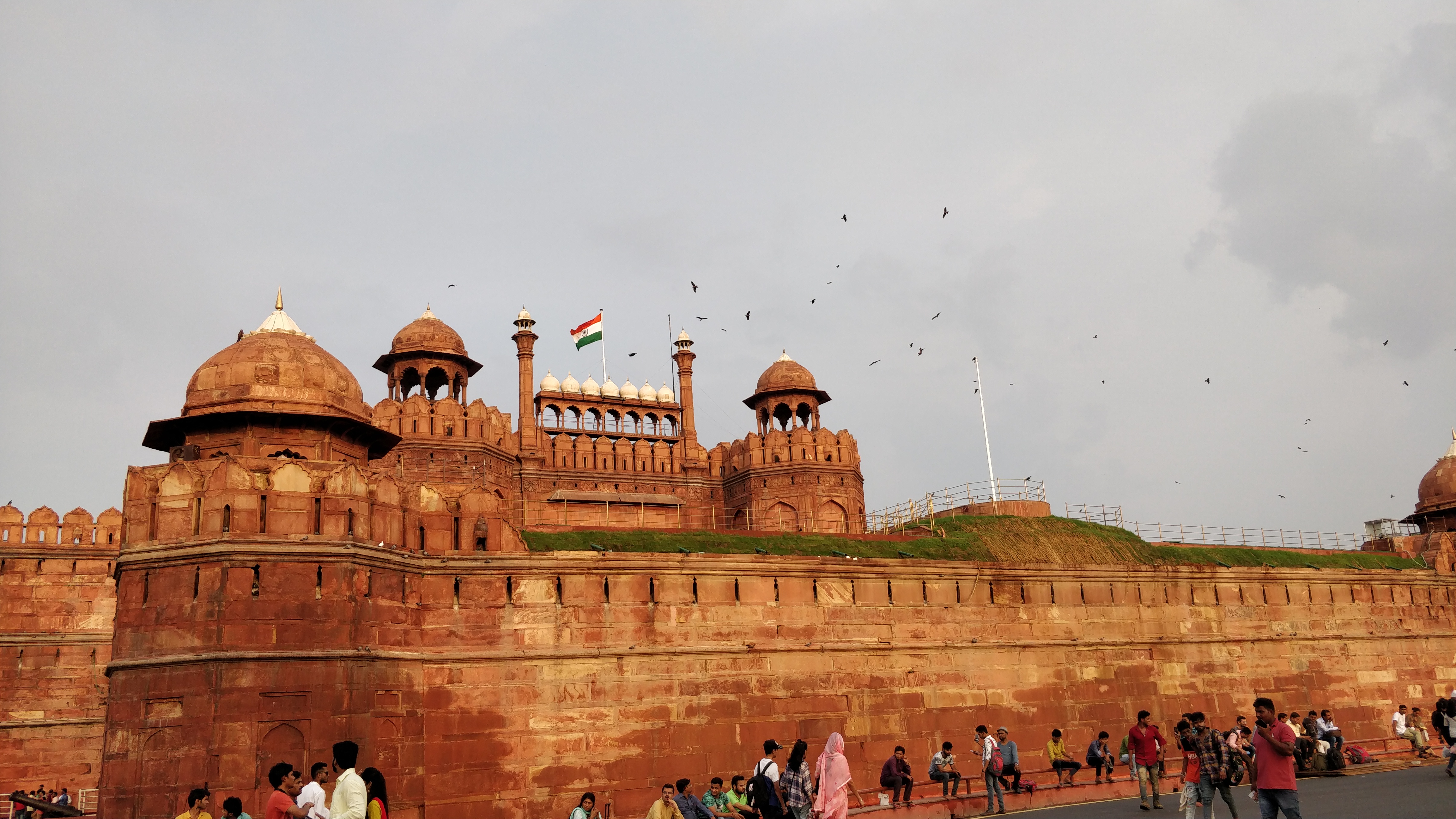 The Red Fort - so named for the red sandstone it's made from.

And I think I had more people ask for photos in one day at the Red Fort then I did during my entire time in China. One person approaches asking for a photo and as soon as you agree everyone in the immediate vicinity rushes over, wanting their own photo with the foreigner. I tried to ask everyone their name and where they were from but sometimes people were just so speedy in running up and taking the photo and running off that I didn’t even have a chance… 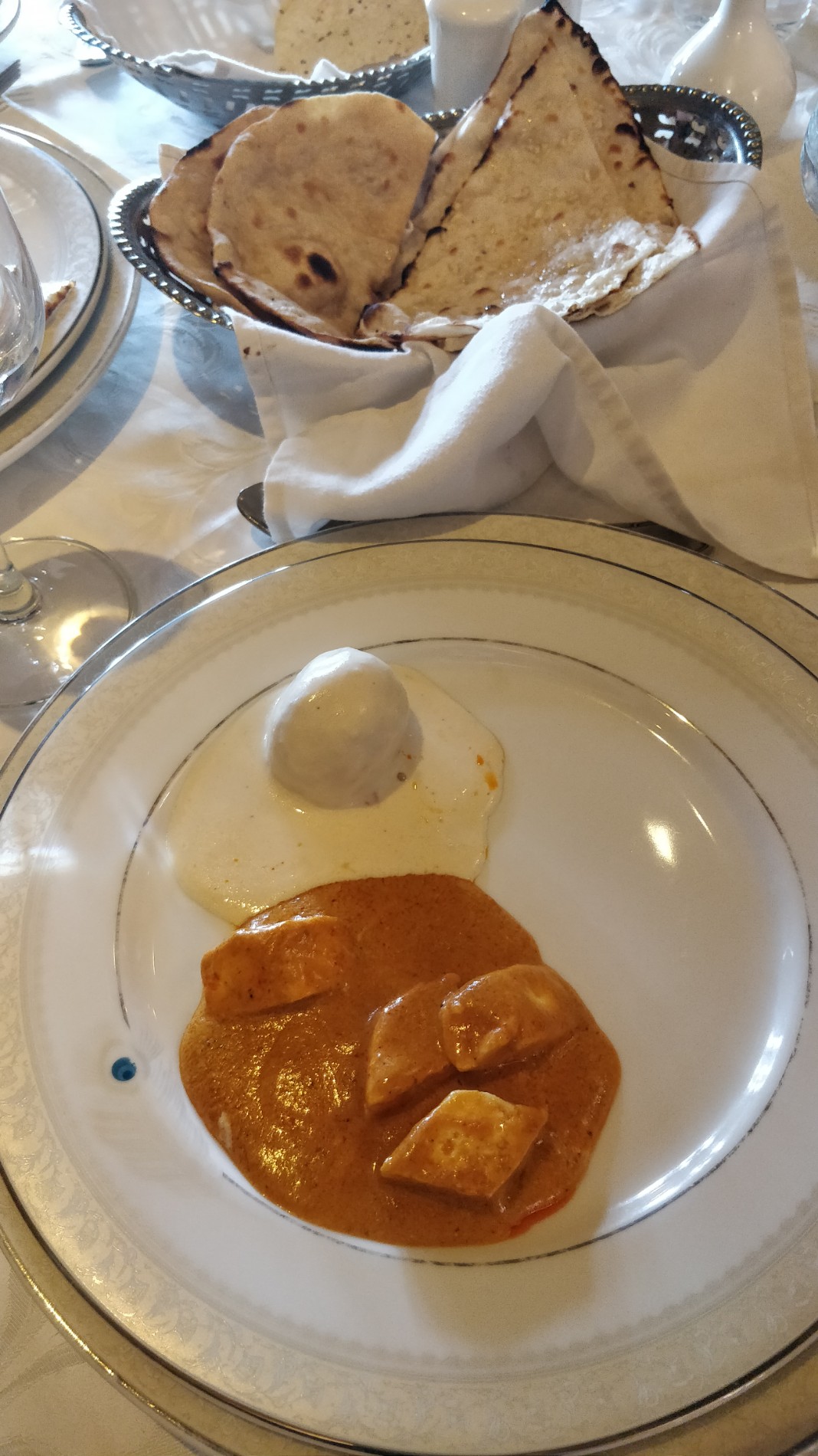 This place was expensive, but was the absolute best paneer I had in all of India.

It wasn’t all terrible. The food situation was absolutely amazing. It was so good and so cheap and very vegetarian friendly. The paneer was always fresh and the naan was always hot~ You could pick up little cups of masala chai on the street for ₹10 (¢14) that tasted like heaven. 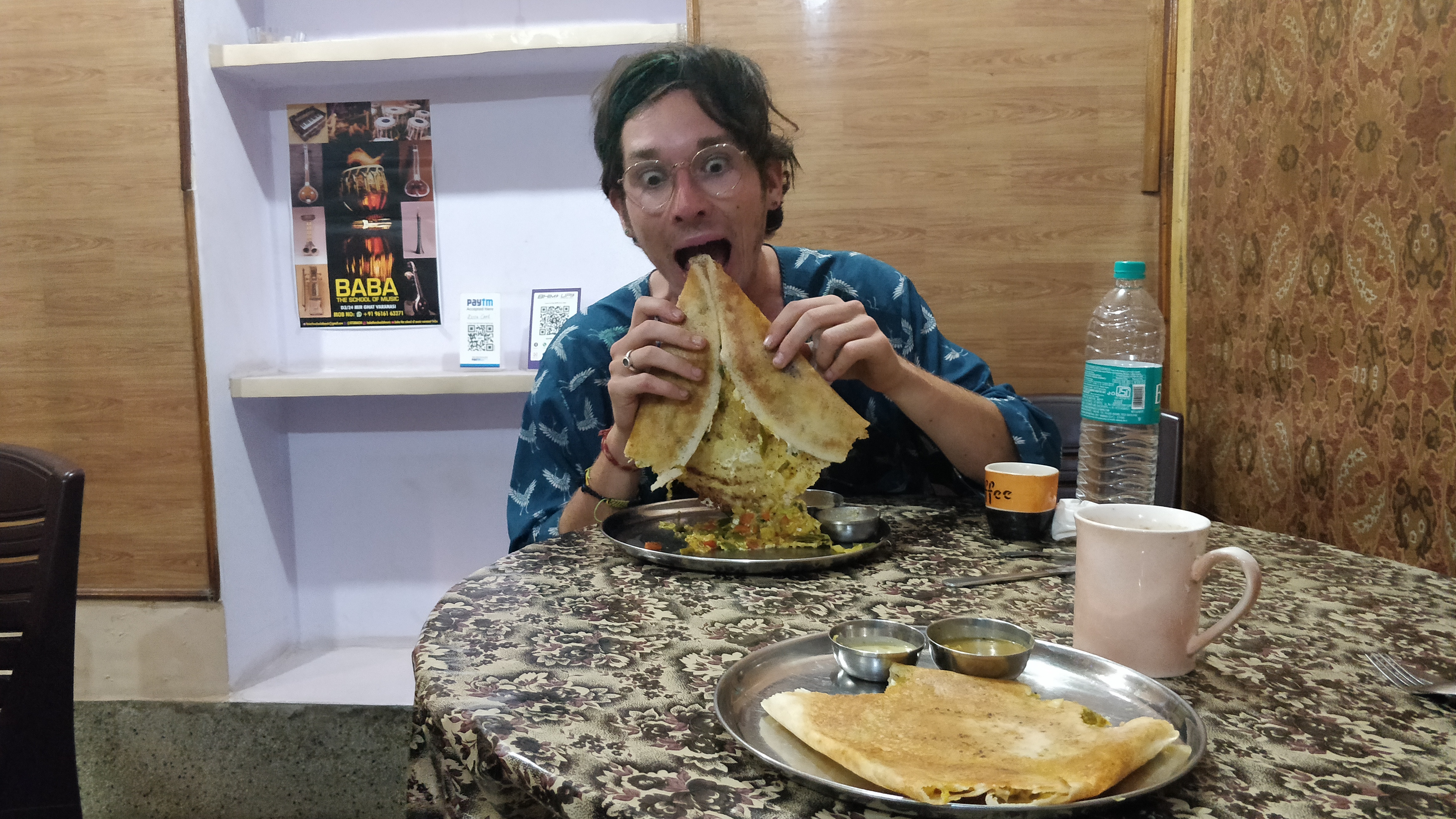 Max and a delicious dosa. 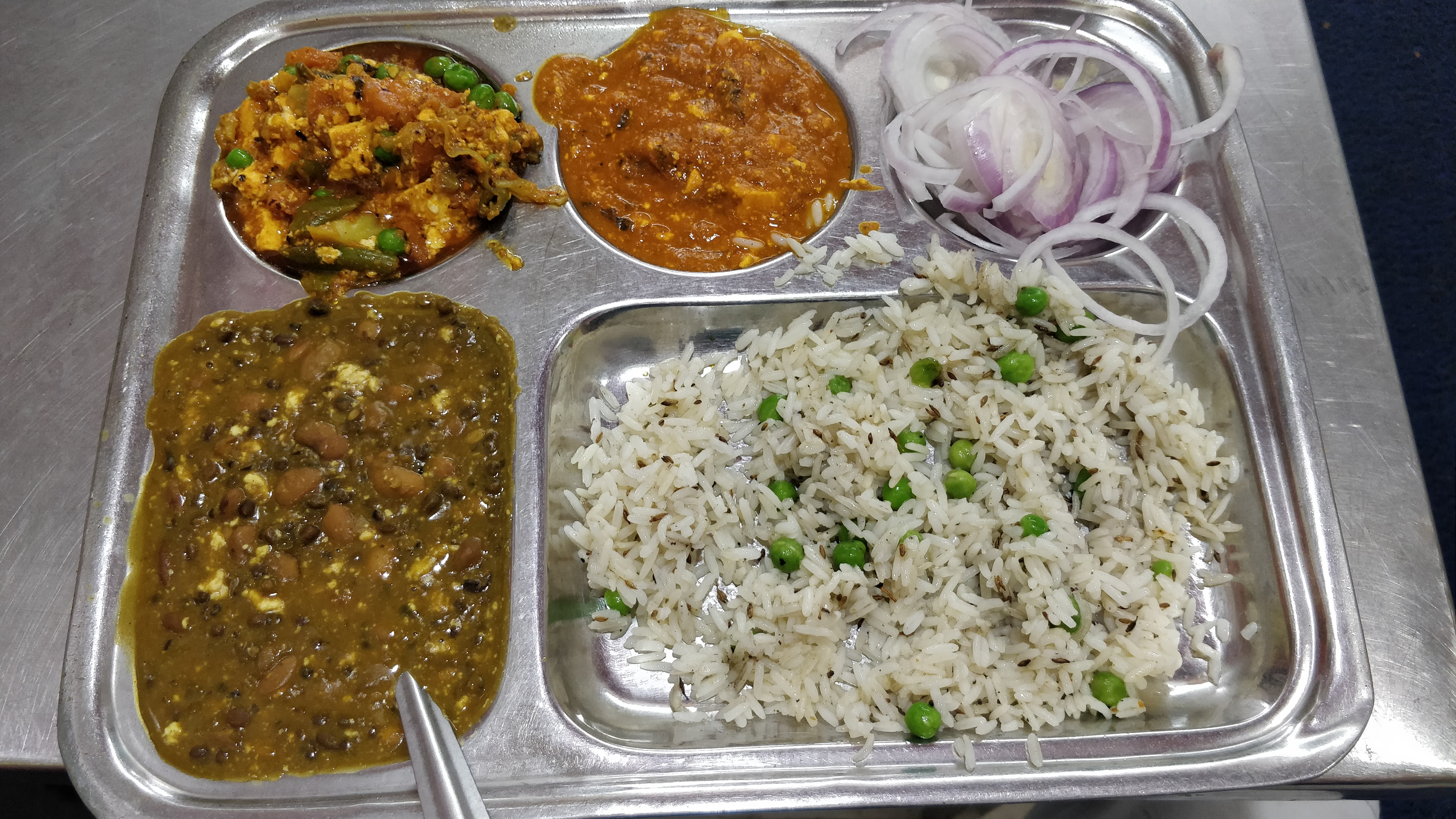 I can't name them anymore but they were all so good 😁 I learned that up north they like to eat raw onions as an appetizer, sometimes with a little bit of lime.

All in all I spent about two weeks in India, one in New Delhi and one in Varanasi, next to the river Ganges. I went just after finishing up my month long trip with my family in China - Dad and Eli flew back to America, and Max had flown to India a couple of days before me. I linked up with him in Varanasi; he had been making his way through Rajasthan for about a week and a half before that. You should ask him about his own scam experiences 😂 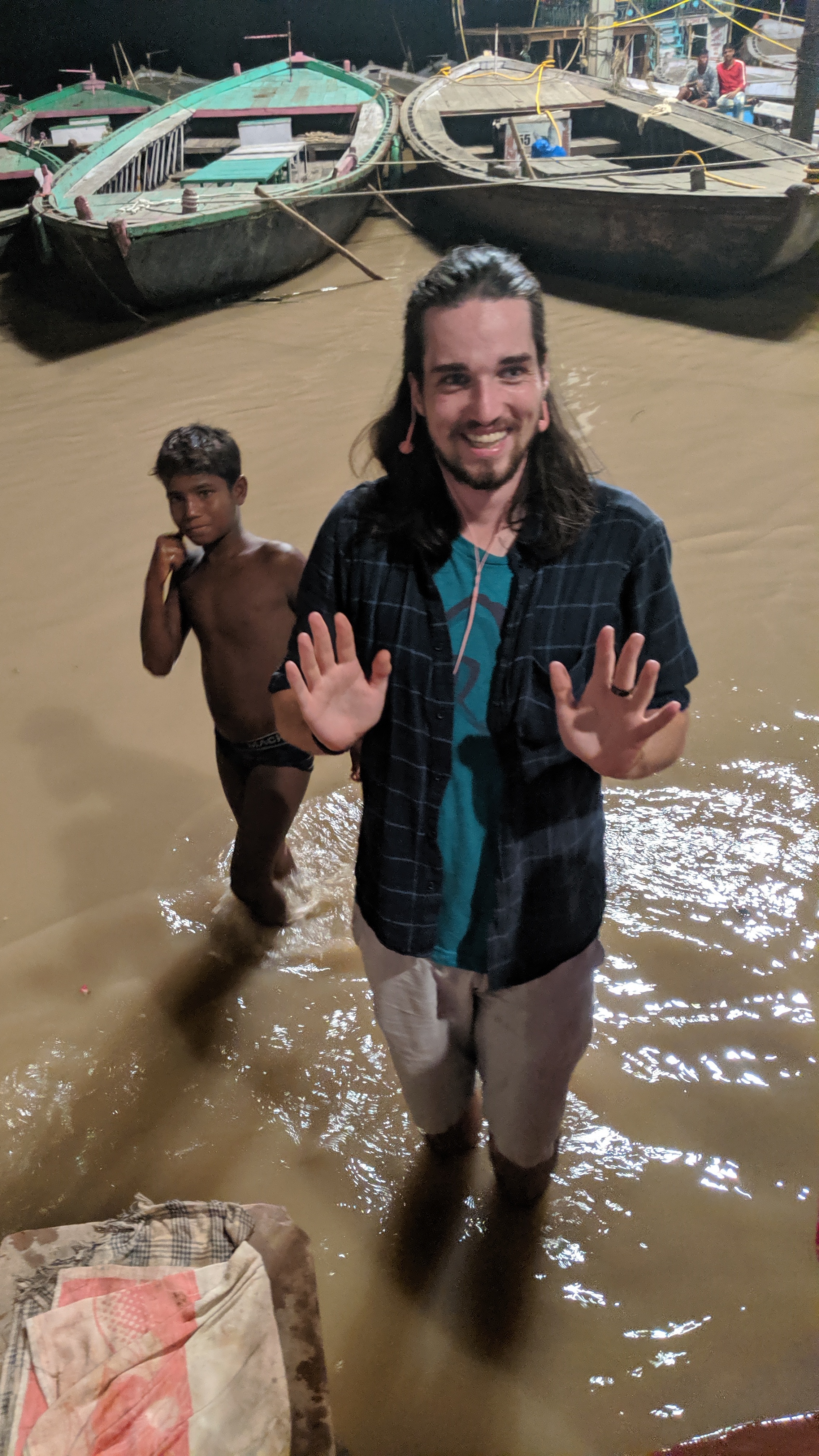 Hanging out in the famous river Ganges. It was honestly really muddy and disgusting (Max and I saw a dead cow floating through it one time) but bathing in it is supposed to forgive you of all sins! 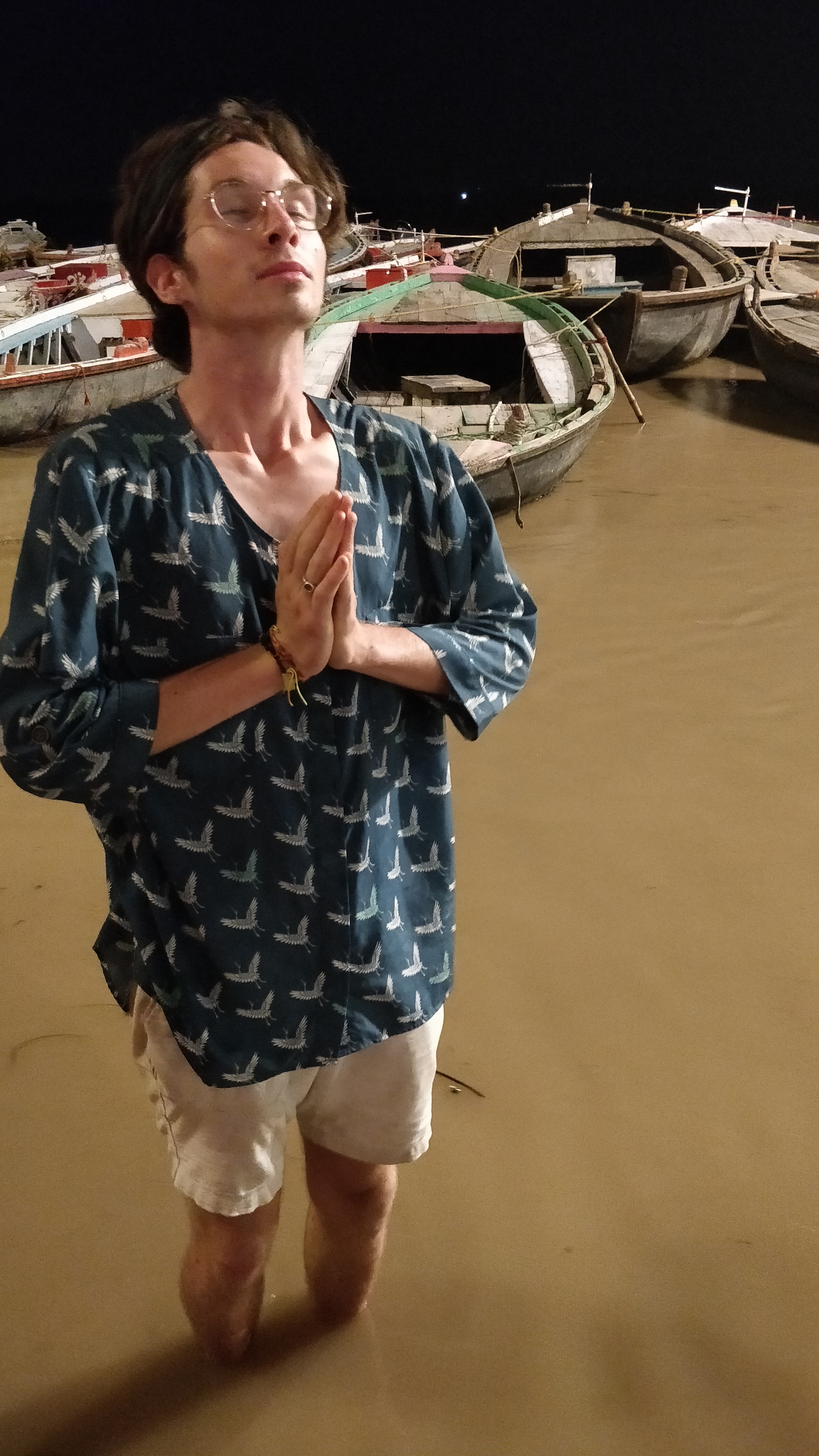 Max in the Ganges - neither of us dared to go deeper than our feet.

I think India probably can be an awesome travel experience, just Max and I did it wrong. Every other foreigner we met talked about what a great time they had - out in the countryside. I’ve still got many other places I want to go see, but if I ever do make my way back to India I’d definitely do it very different! 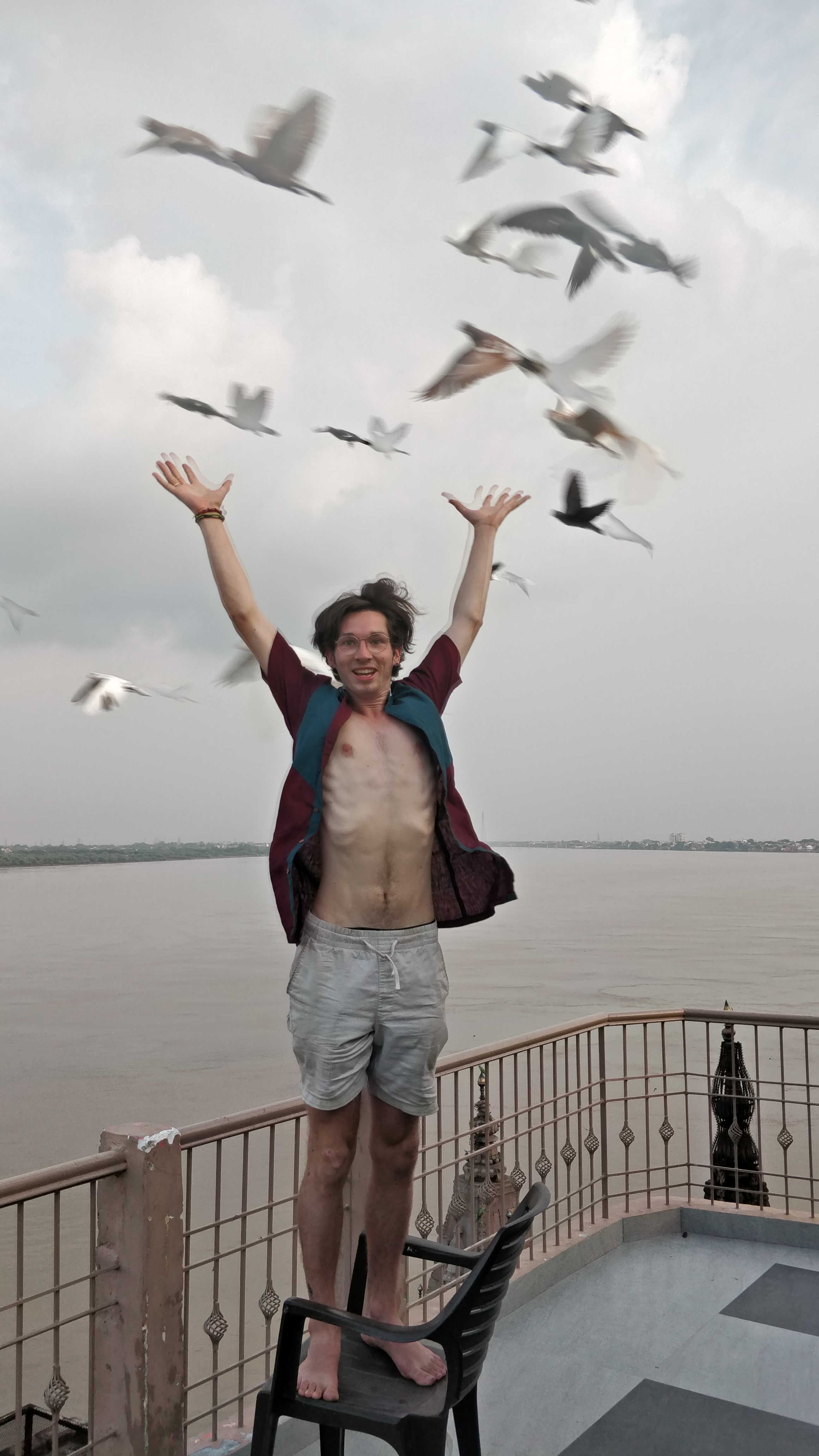 Despite it all, there were still some amazing moments!

You better get back, honky cat

Living in the city ain’t where it’s at

It’s like trying to find gold in a silver mine