I was actually in Hong Kong for one of the protests, I just didn’t realize it. One of the earlier ones, before they became riots. My dad and my brother Maxwell arrived a few days after that.

(For those who may not be so up to date on the situation in Hong Kong you can read more here.)

The first time I visited Hong Kong was just after I had finished my internship and my first impression was “this is exactly what I had expected Beijing to be!” With over five times the population density of the capital, Hong Kong fulfills the foreigner’s imagination. Huge towering buildings, looking rather precarious in their old age, looming over avenues filled with pedestrians and British style double decker buses. Beijing is populous but it’s large and sprawling. Restaurants close at ten and everyone is in bed by eleven. Hong Kong, by contrast, remains bustling into the wee hours of the night - I loved it!

My dad and my brother summed it up well. Dad’s plane arrived first, and when we stepped off the airport metro into the sweaty hot tropical air he craned his neck up at the buildings towering above and said “it’s just like a cross between New York and Miami.”

My brother got in the same day at midnight, so while Dad was attempting to sleep through the jet lag I went and picked Max up. As we were walking back from the metro station catching up on each other’s lives he said “you know, Hong Kong really seems just like a cross between New York and Miami.”

New Miami if you will.

While exploring the city on my own in the couple of free days I spent hanging out in Hong Kong waiting for them to arrive, I stumbled across a huge protest wall down in one of the underground pedestrian tunnel. It was so fascinating I tried to capture the whole thing in a couple of panoramas and stitch them together - it didn’t come out so well but you can still make out some interesting parts. You can scroll through it below, or click on it to open the whole thing in a new tab.

There were a couple of interesting parts I took photos of in particular. 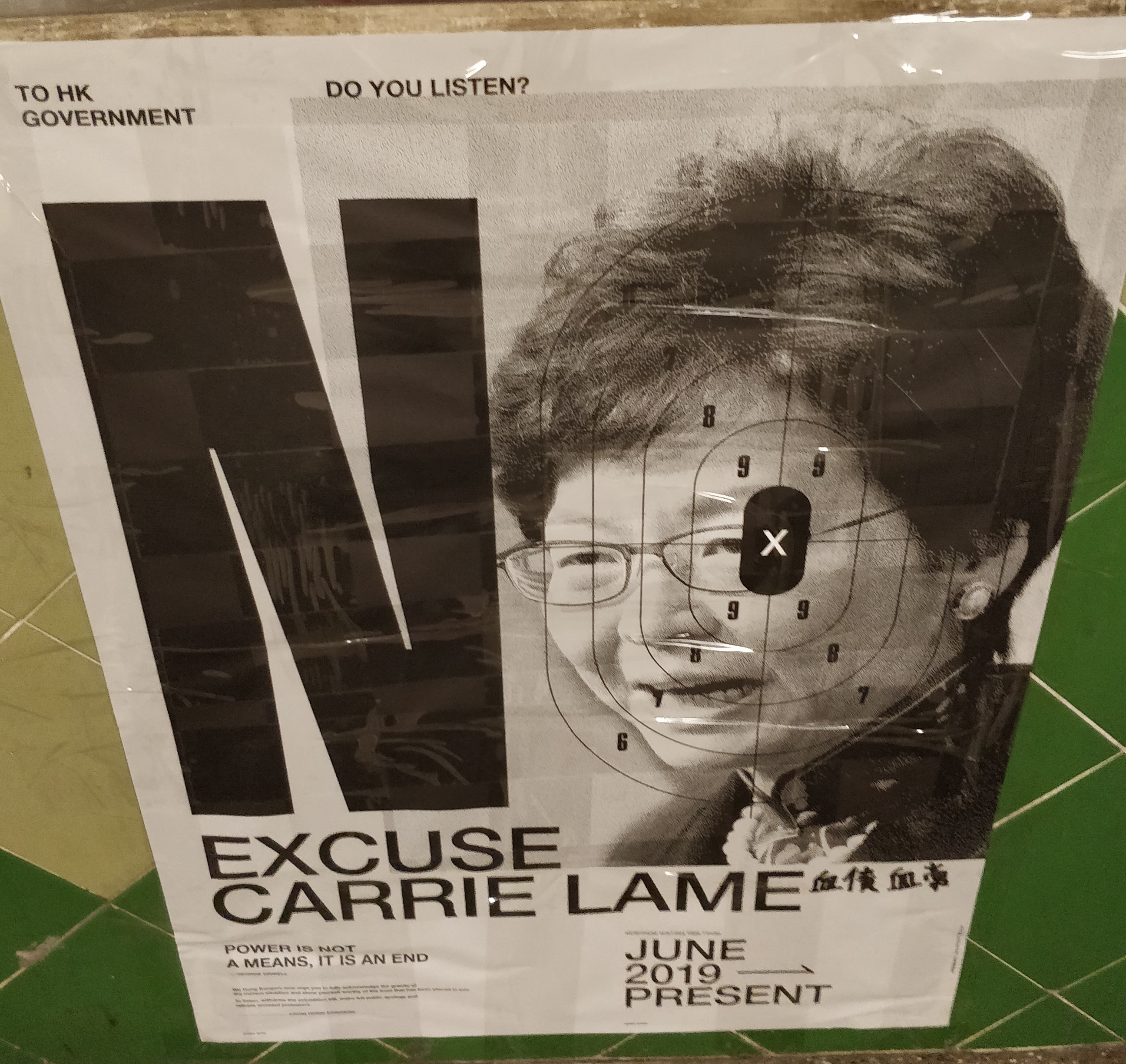 Carrie Lam, the current head of Hong Kong government. Particularly hated by the protestors. The gun target motif is foreboding - especially given the recent violence.

A list of "crimes" that these three government officials have committed. Carrie Lam, on the left, is again particularly targeted.

This one is pretty straightforward. 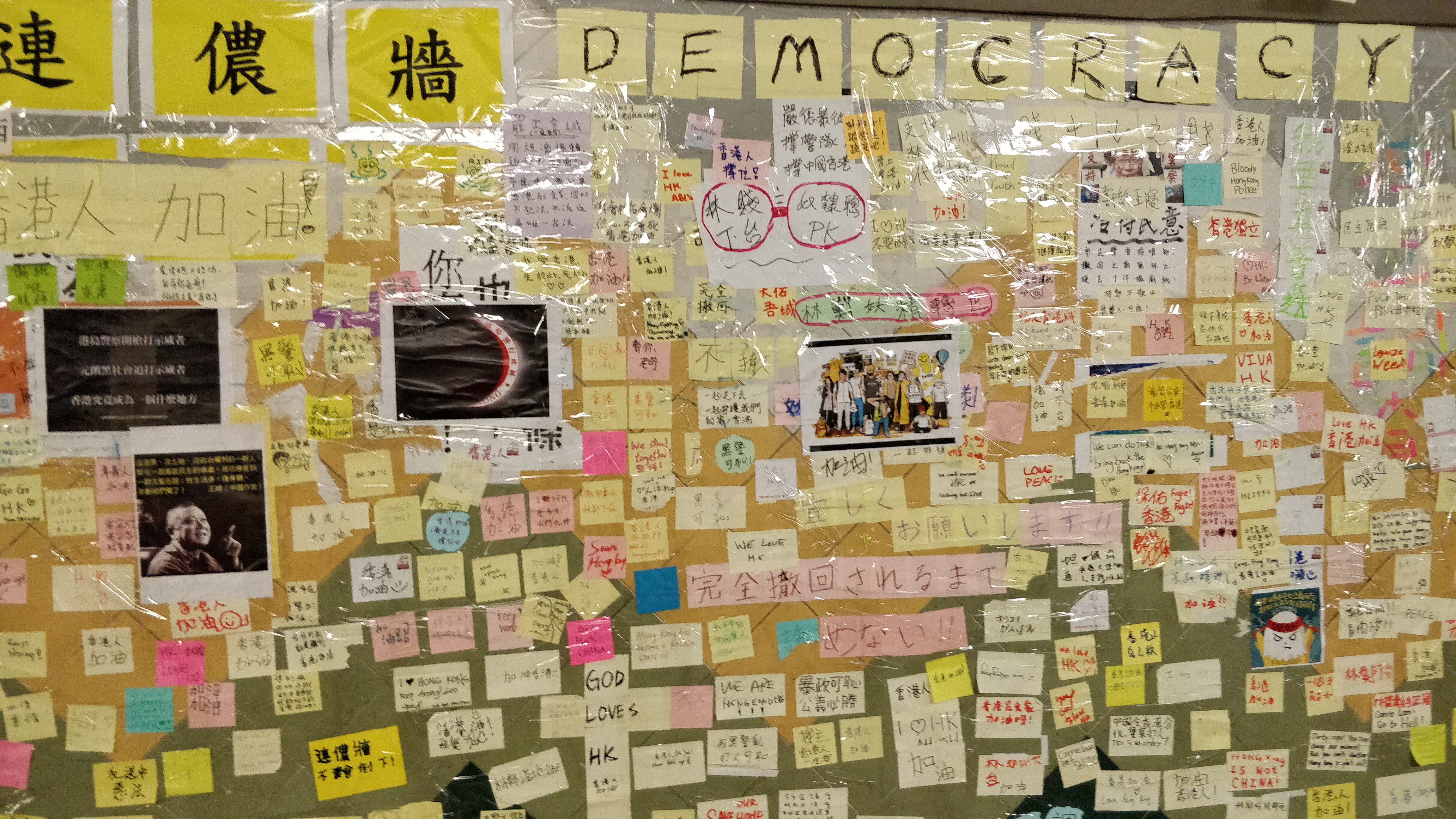 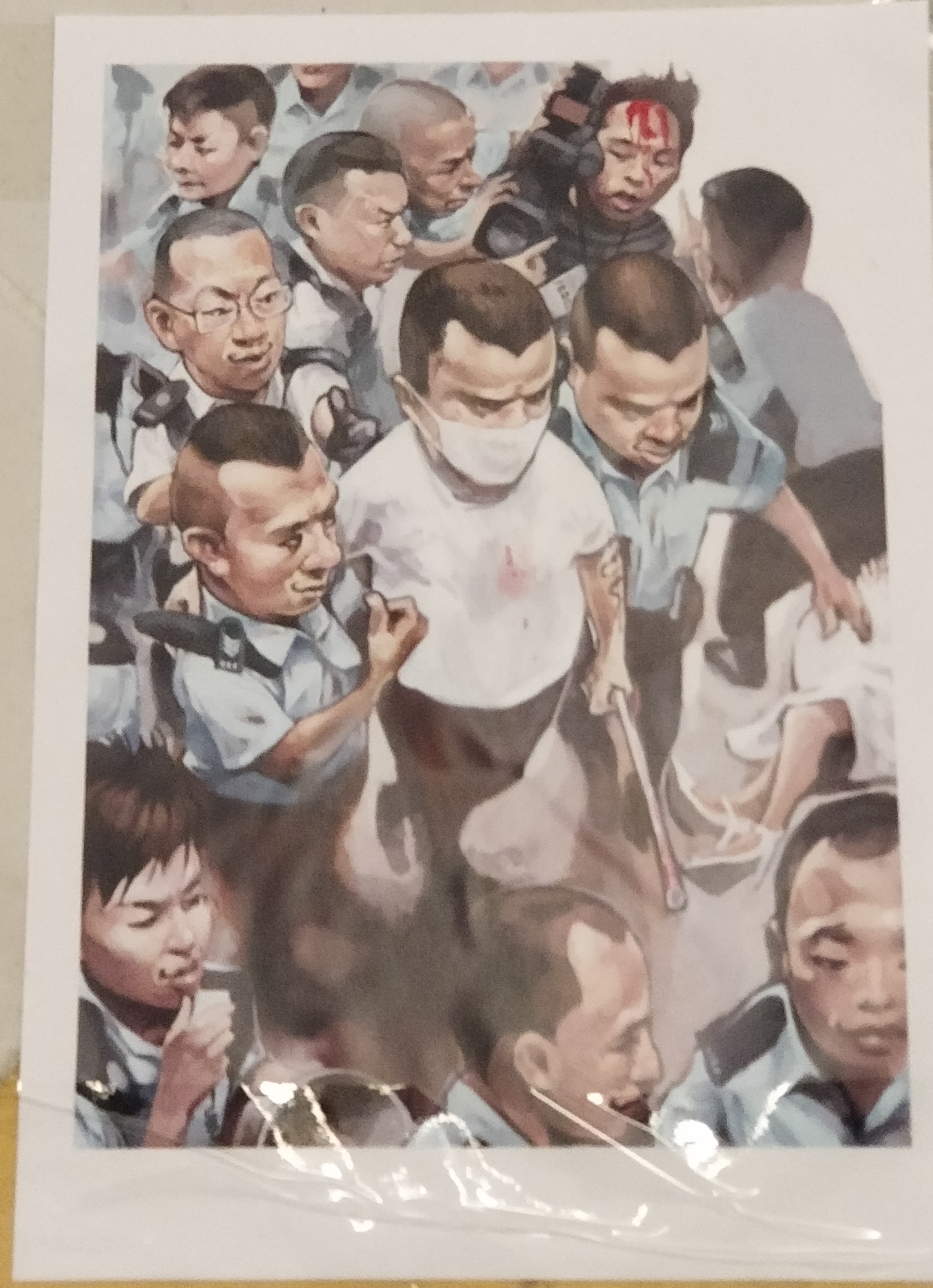 This was in reference to an incident where a group of men wearing white shirts assaulted a group of black shirted protestors in a metro station. It was rumoured that they were linked to gangs in Hong Kong and that the police had been paid off/cooperated with them. 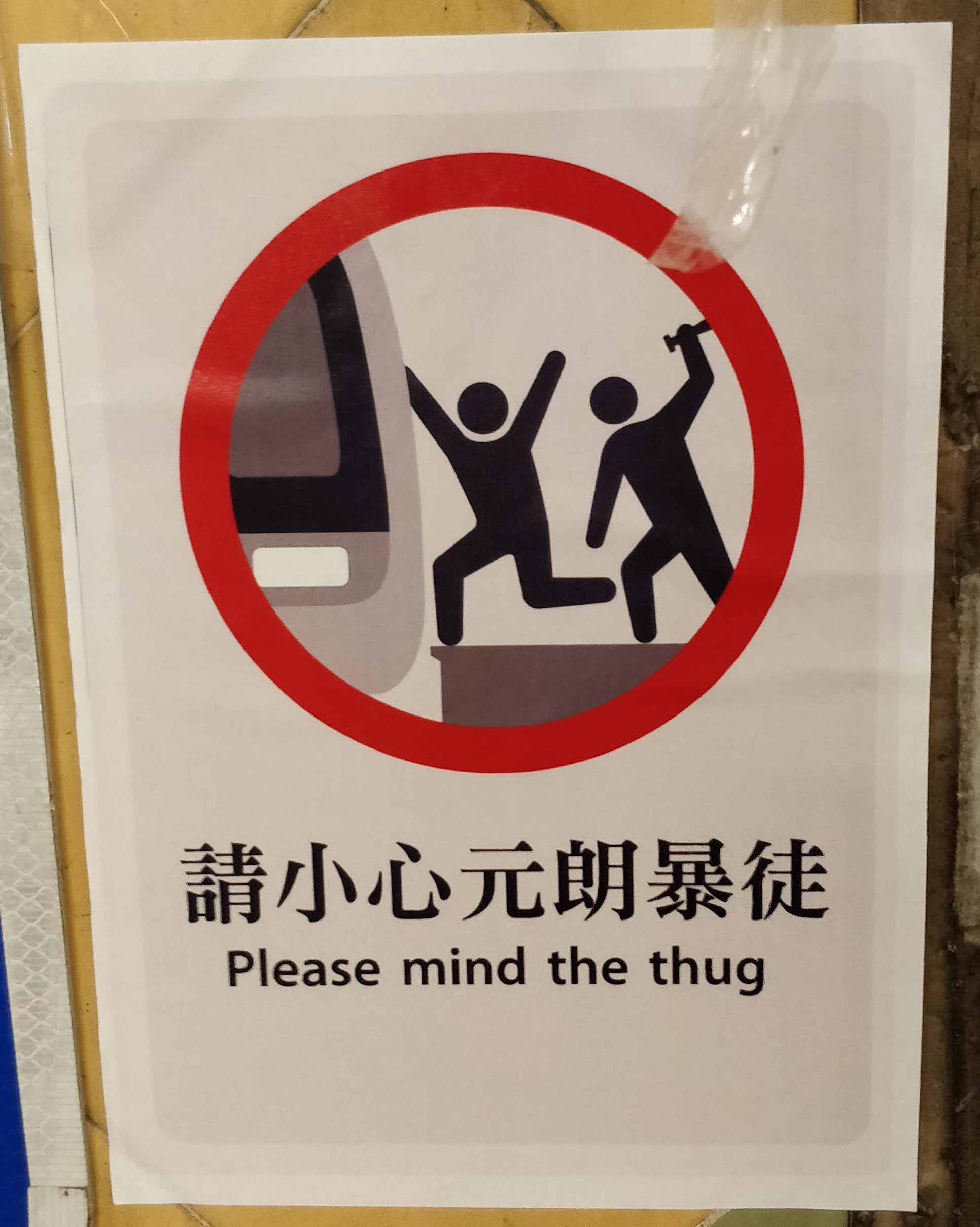 Another reference to the same event. 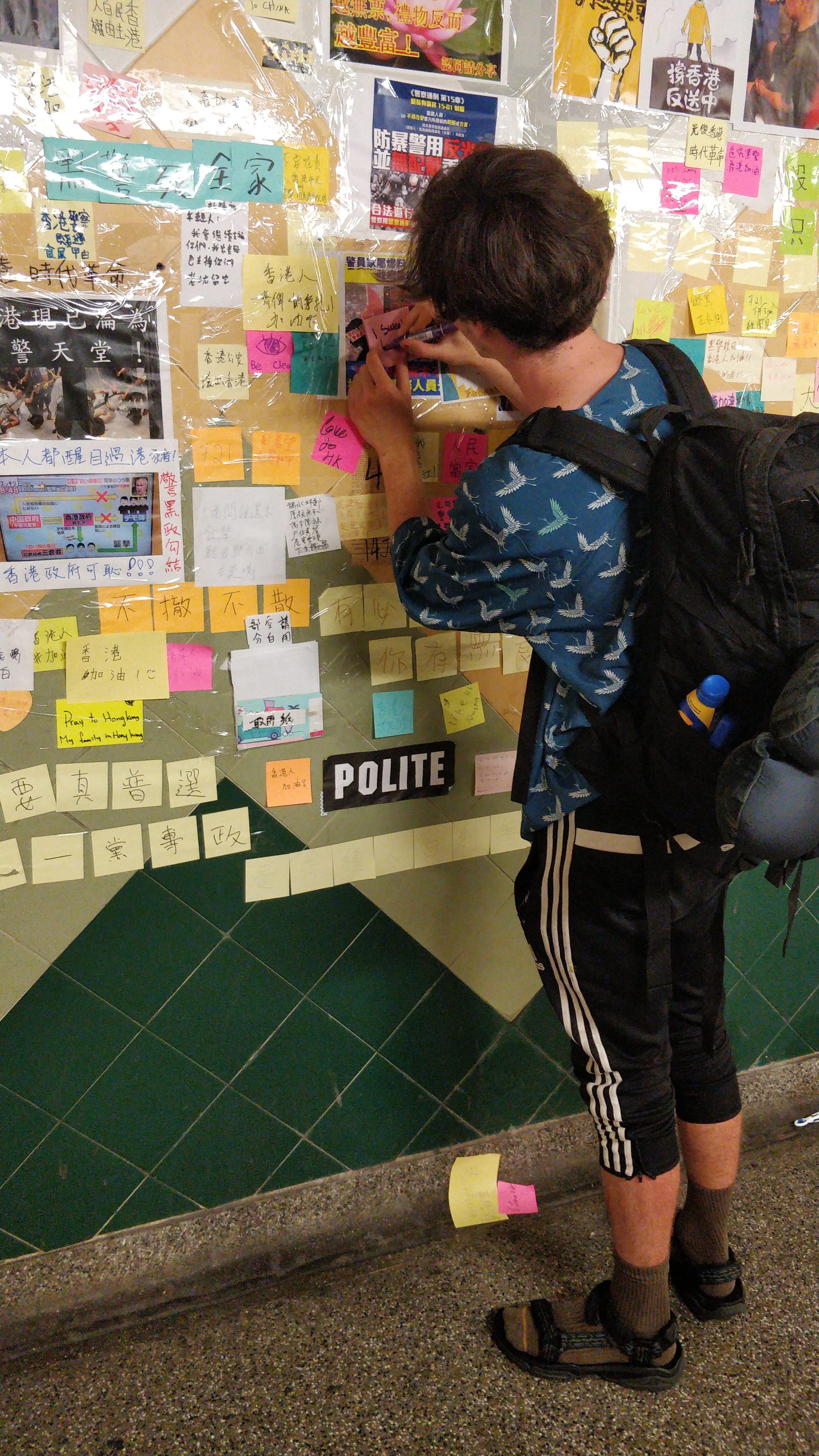 Out and about in the city of Hong Kong life continued mostly as normal, but we still managed to stumble into a few signs of the protest. 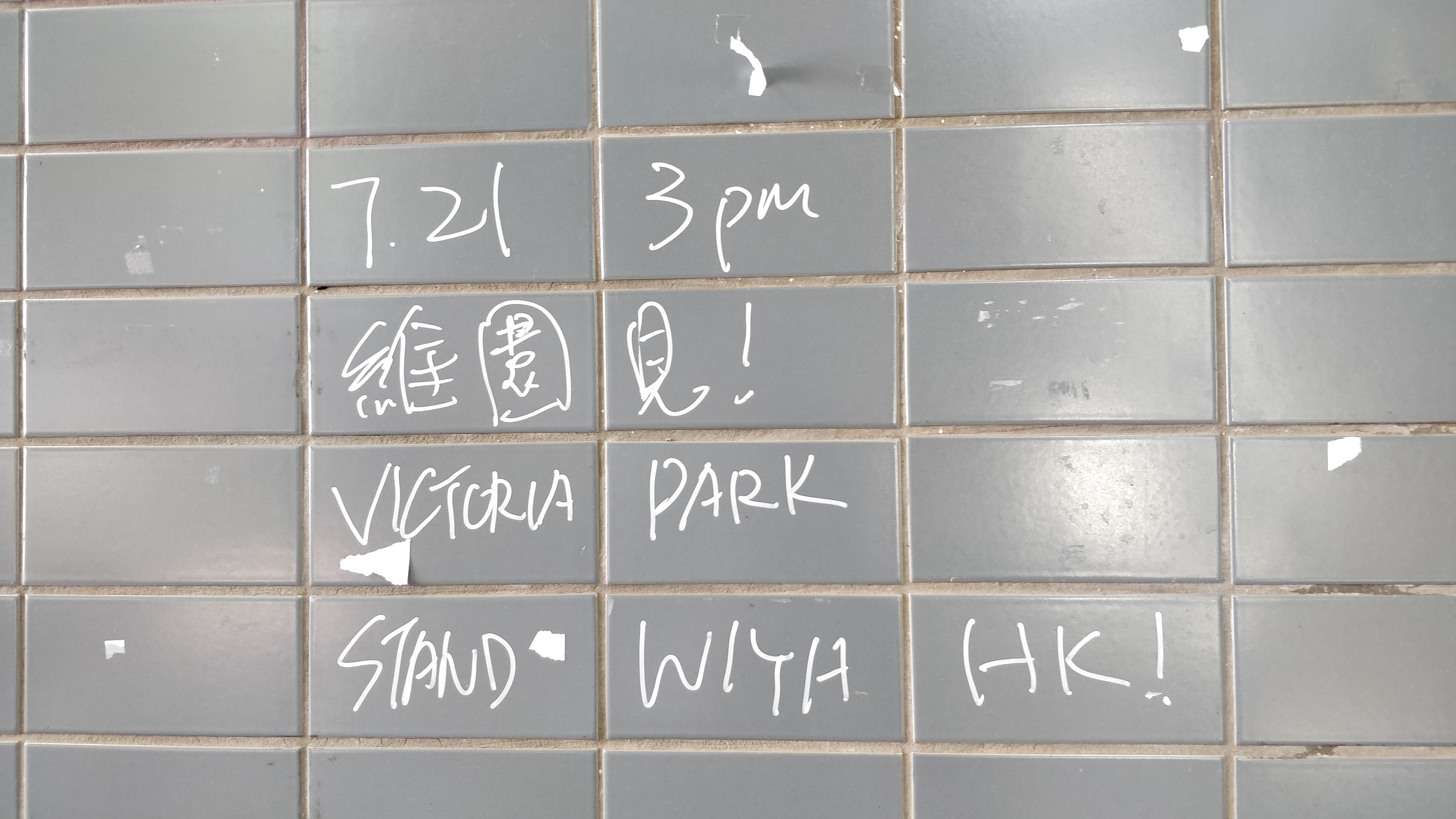 Walking around one day we found this - July 21st had already passed, but this remnant remained. 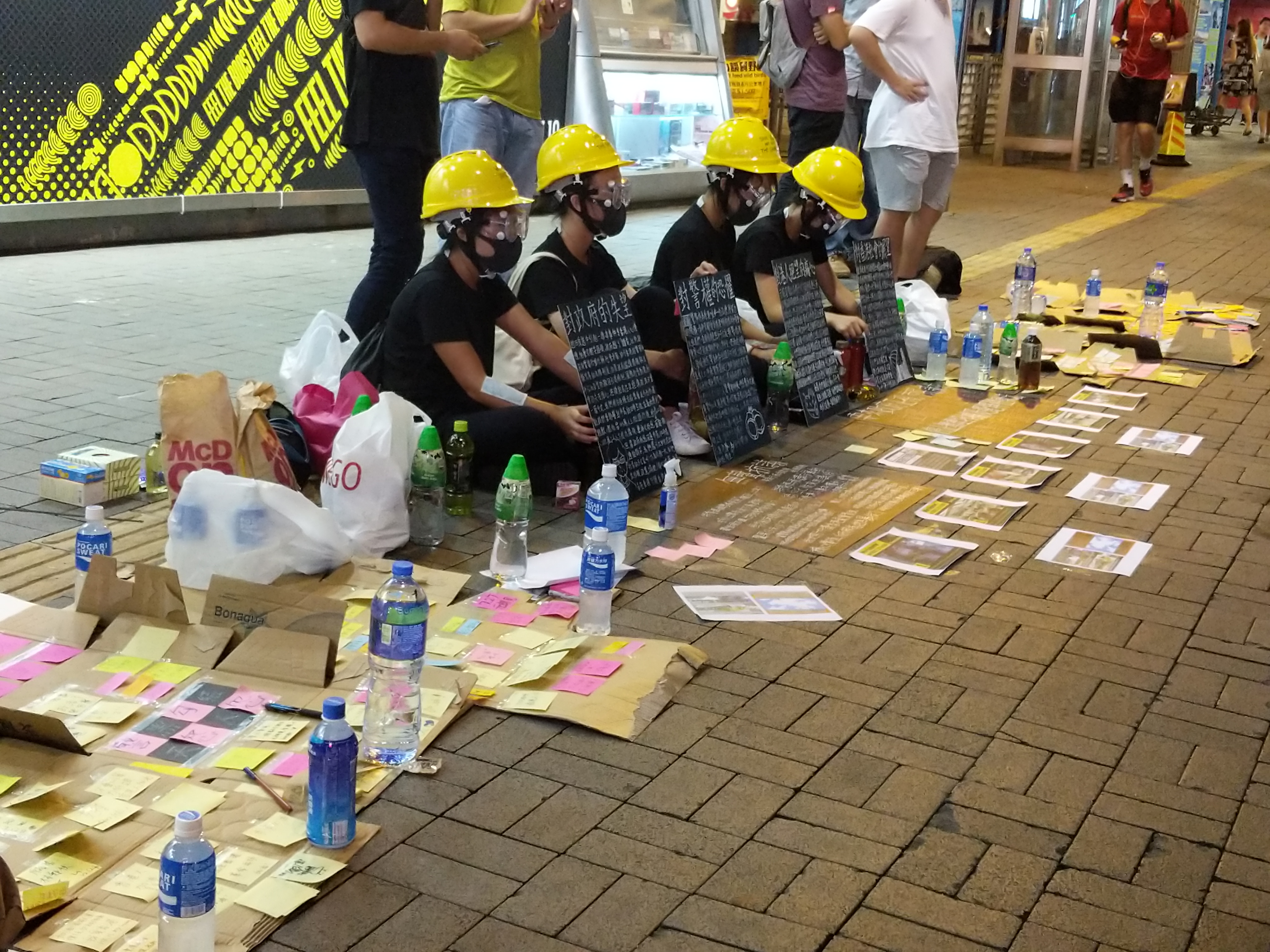 One day we ran into four student protestors sitting in the harbor area of Hong Kong ferry.

I haven’t followed the protests too closely, but I know they’ve been growing more and more violent. During 国庆 (guoqing, the Chinese independence holiday celebration) police fired on and injured a protestor for the first time and things have only been getting worse since. In the US and Western media in general the protests have been painted as Democracy Loving Youths fighting to throw off the restraints of the Oppressive Communist Government - but there are some pretty terrible things happening on both sides:

The account that this is linked from, 胡锡进 (Hu Xijin), is the “Editor-in-chief of Chinese and English editions of the Global Times” and provides insight into the Chinese viewpoint. He points out in another tweet that the “revolution” in Hong Kong is very similar to the events happening in Catalonia - but no Western leader seems so eager to support those protests.

I’m not well versed on this issue and don’t know much besides the few articles I’ve read. This faithful child of the enlightenment believes that democracy is good - but violence leads to violence and I think that the tactics being used by the Hong Kong protestors are undermining their own cause.

I know two mainland Chinese currently studying at Hong Kong University and when I asked them about it they seemed to just wish it would quit interfering with their research 😂 !