Living in Beijing is incredibly convenient.

The first major amenity is the metro. The metro system here is far beyond any American city. It follows a pseudo grid system, which means that no matter where you find yourself, you’re probably only a ten minute walk away from a metro station. In the West we use colors to represent out metro lines, but here in Beijing they use numbers because they would run out of colors 😂 (there are fifteen lines!) It costs less that 1 USD to go anywhere in the city, and places of interest always have a metro stop right by them. Yes they can be crowded, but there’s always another train in a couple of minutes (the longest I’ve had to wait is about ten minutes, and that was on a weekend when they run fewer trains). You can even pay by QR code, though I opt for a physical metro card because QR codes don’t work on the buses. The biggest downside is that they close early - usually around 11 PM. 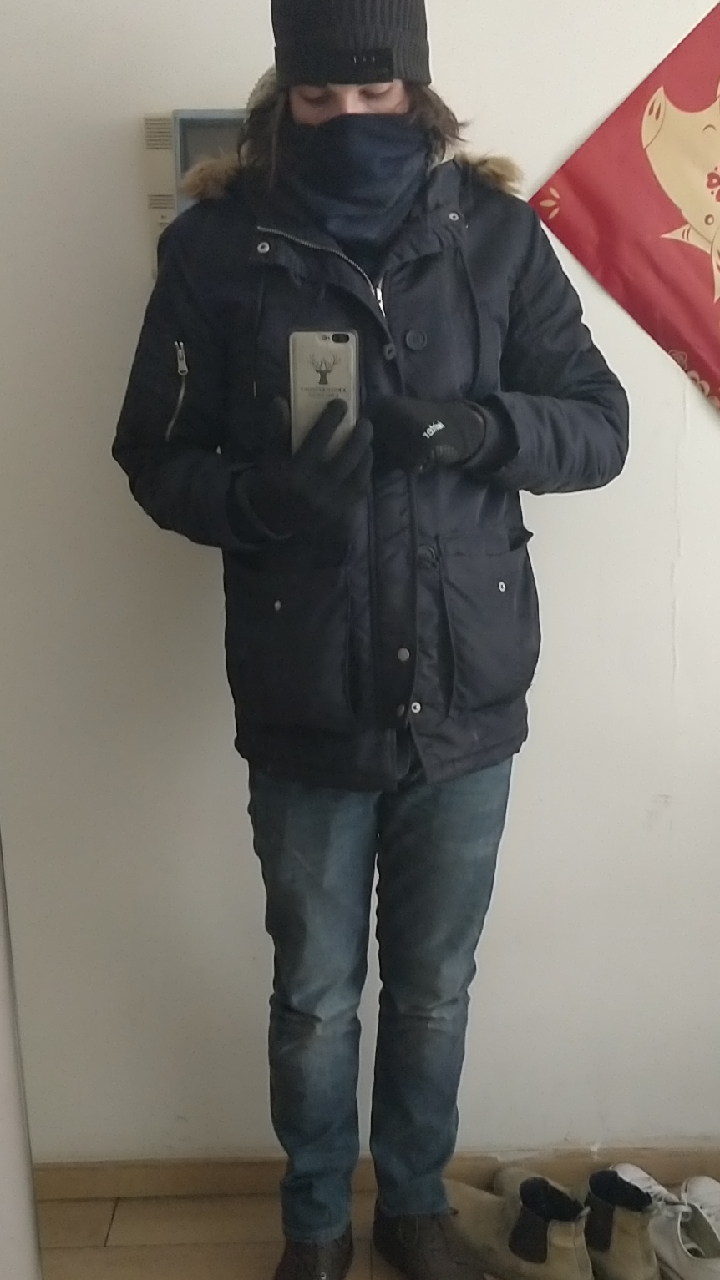 Bundling up for the winter.

Cause we got snow here once or twice!

The 颐和园 (yiheyuan "Summer Palace") was gorgeous in the snow. I had to play hooky from work to be able to see it while it was still snowing 😅

If the metro is closed, or you’re too lazy to walk, or you’re going somewhere a little more far flung, you can always hail a cab or call a 滴滴 (“didi” the uber/lyft of China). I don’t do this often but the few times I have have been easy. They are all tolerant of English speaking riders, they just won’t speak much English themselves. You can give them a Chinese address, or just point to the location you want to go to on the map on your phone (remember to download Baidu Maps or Amap since Google Maps doesn’t work in China). A forty minute to hour long trip to or from the airport costs me only about $15, and if you’re going to famous tourist destinations with several friends splitting the cost of the ride makes it a no-brainer. My only complaint is that late at night in popular party areas it can often be hard to get a cab or Didi - queue times on the app can reach over an hour 😱 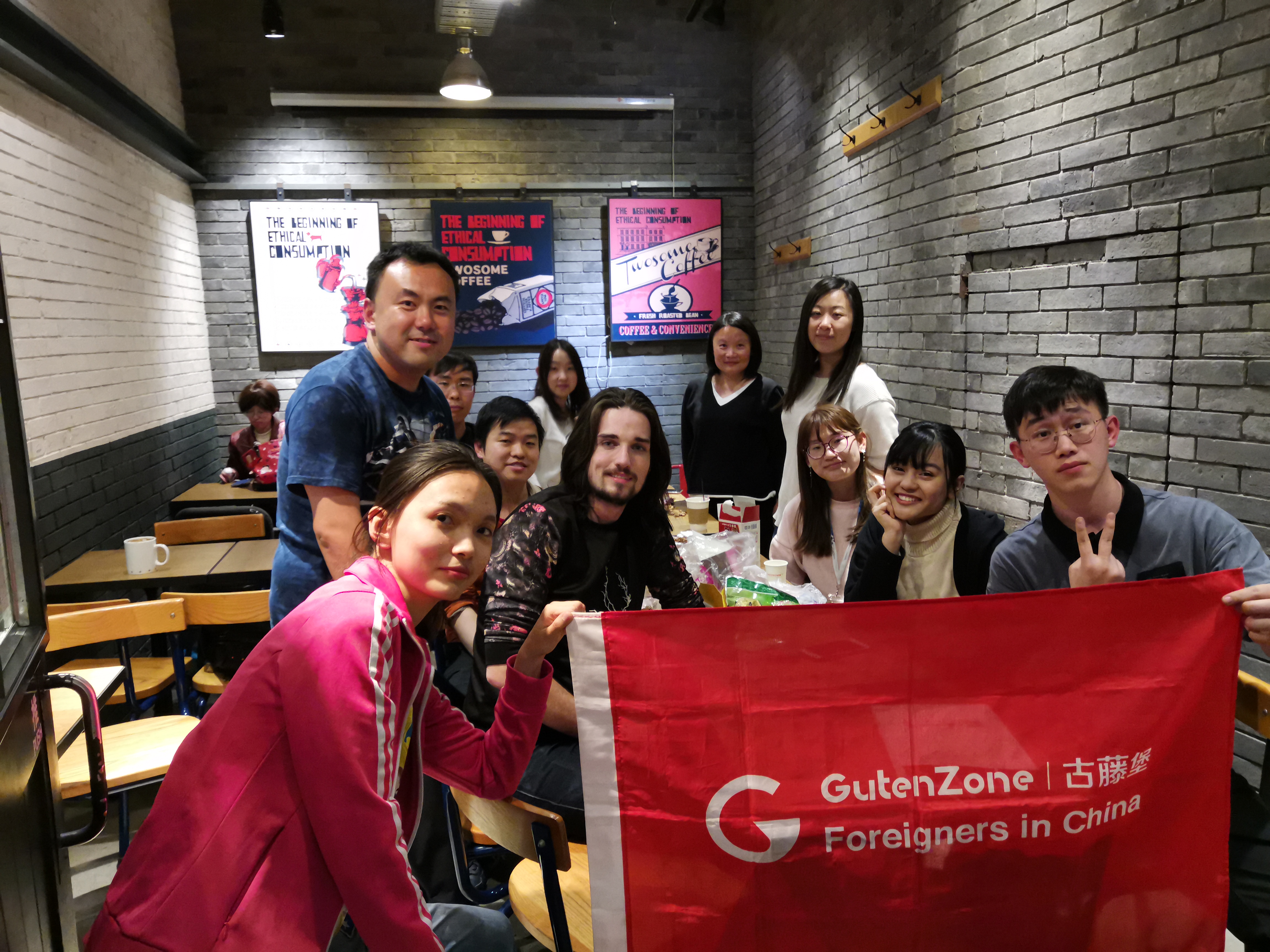 I had two language exchange groups that I went to every week. One was on Friday nights in 五道口 (wudaokou). 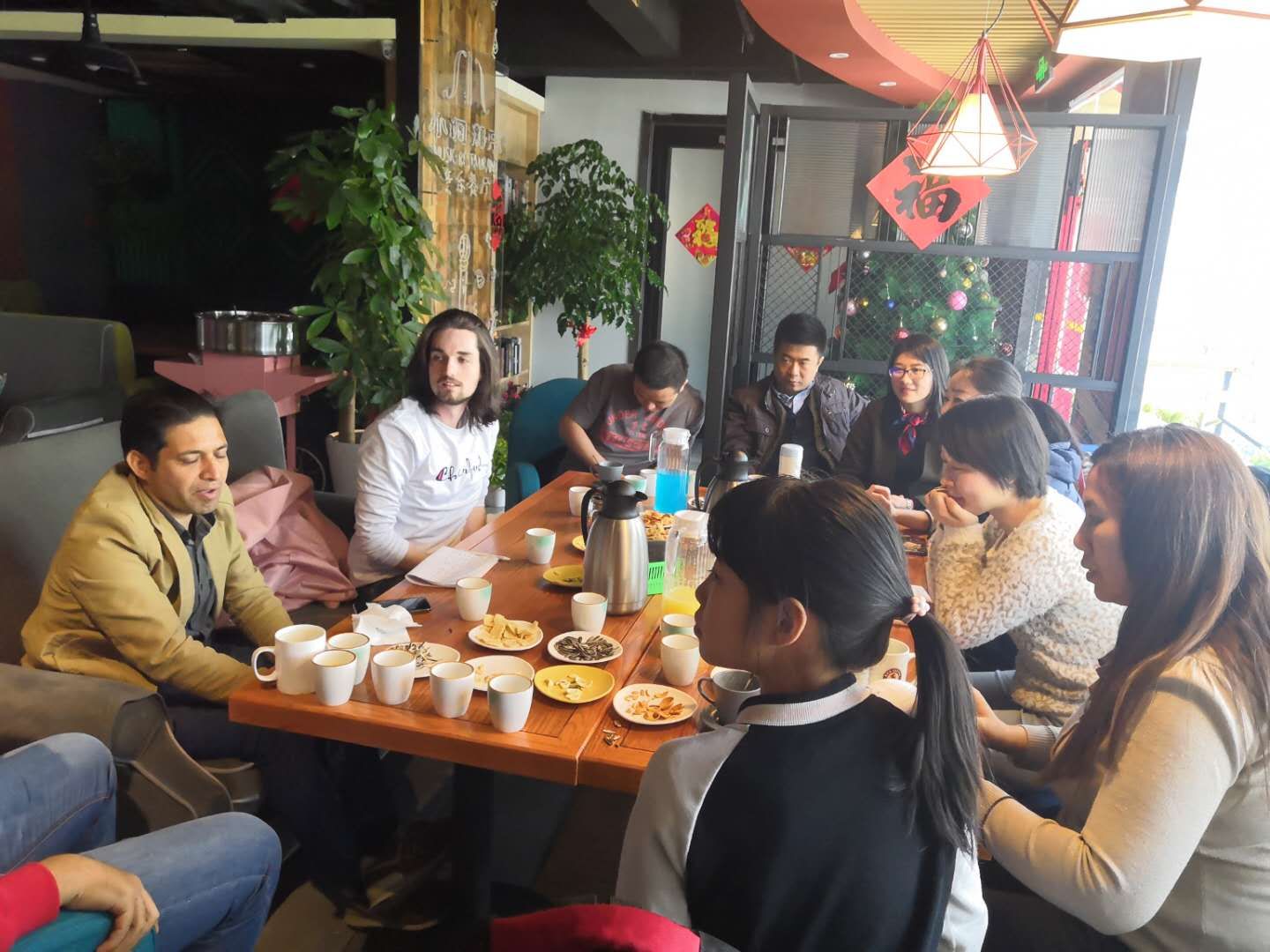 Ride hailing is not the only part of the sharing economy that’s popular here. Sidewalks outside of metro stops are lined with tens to hundreds of rent-able bikes. There are four or five different bike companies and they’re all super cheap - I’ve never paid more than $1 for one. Wherever you are there’s guaranteed to be a bike within a stones throw - or at least a minute or two’s walk - scan the QR code on the back and you’re all set. But there’s more besides bikes. Is your phone is running out of battery? No problem! Most restaurants and coffee shops now carry banks of battery backs that you can rent for cents on the hour to charge your phone back up, then redeposit in the battery bank. I’ve even read of sharing economy makeup rooms - but never seen one in person. 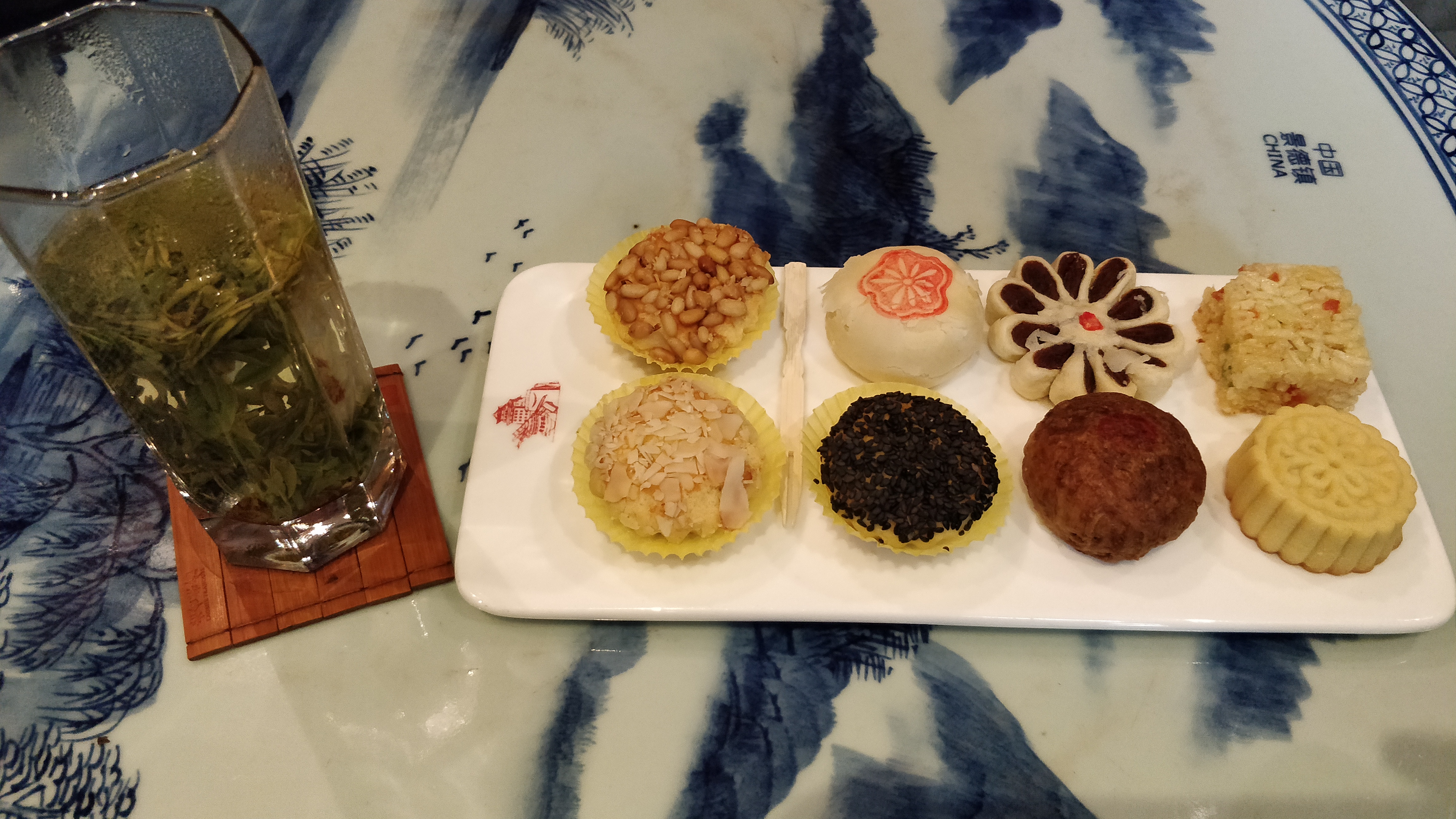 Then there’s food delivery. Ordering delivery in the US is a mess unless it’s pizza. There seem to be at least three different apps out of Silicon Valley fighting for dominance at any given time, the selection is usually mediocre, delivery often takes over an hour and the fee is usually five to ten dollars. But in Beijing food delivery is ubiquitous. Almost every restaurant is registered on the top two delivery apps (美团外卖 meituanwaimai “Meituan Food Delivery” and 饿了么 e’le’me “Hungry?”), even the mom and pop ones. You can order whole meals, or just small snacks like a boba milk tea. Delivery is usually a half hour to an hour from order time and it’s so damn cheap - the delivery fee is usually $1 USD or less. So many people 叫外卖 (jiaowaimai “order takeout”) so often that the streets of Beijing are constantly swarmed with delivery people toting meals on the back of their motorbikes. Restaurants fill so many delivery orders that they have the process down cold, even appropriate utensils are included. Ordering delivery is so convenient that there is more and more of a culture of just staying at home on one’s computer or phone all day, ordering delivery whenever you get hungry, and never leaving the house. 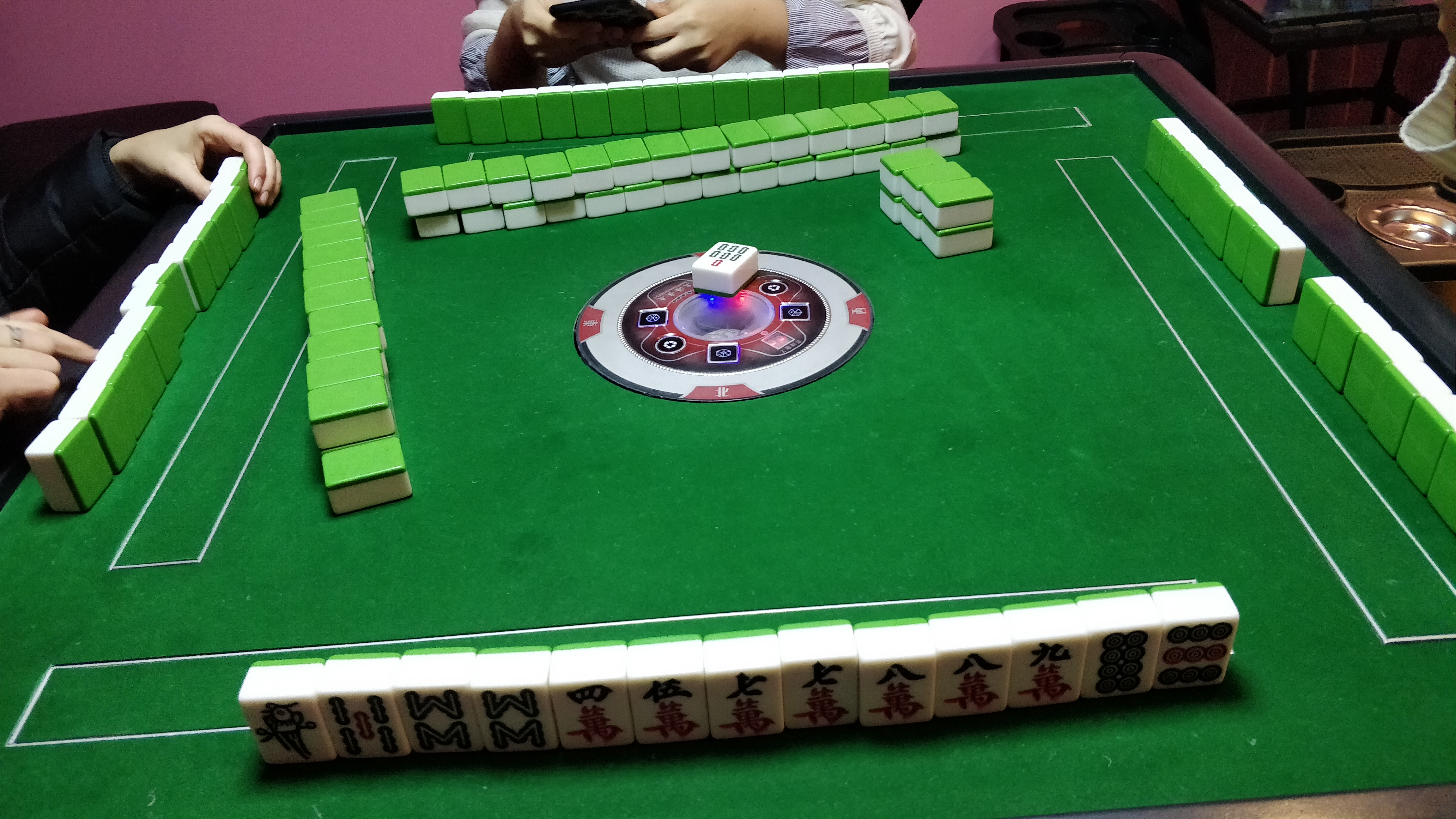 I got to play 麻将 (majiang "mahjong") in a real mahjong parlor - it had a fancy table that would eat all the tiles and stack em up for you.

Beyond food delivery there’s just delivery in general. The people zooming around on their mopeds delivering food are commonly referred to as 快递 (kuaidi “quick courier”), but these couriers are not limited just to food. If you buy anything from 淘宝 (taobao), 天猫 (tianmao) or 京东 (jingdong) the three giants of online shopping you can have it delivered by courier, often for free. And let me tell you - you can order anything off these apps. Normal consumer goods, groceries, legal services, I even saw land being sold on there once (though that won’t be delivered by courier). If you later decided you want to return an item you just let the app know and a courier comes and picks it up right out of your hands! No need for return labels or taping the box back up. One time I used a travel app to buy train tickets and got them delivered by courier. You can even send personal letters by through courier - it gets shipped through the standard postal system to the destination city, with the final leg of the trip from the post office to the receiver handled by courier. The ubiquity of the courier system means that any small shop now has the option to operate under Amazon Prime’s two day delivery guarantee. 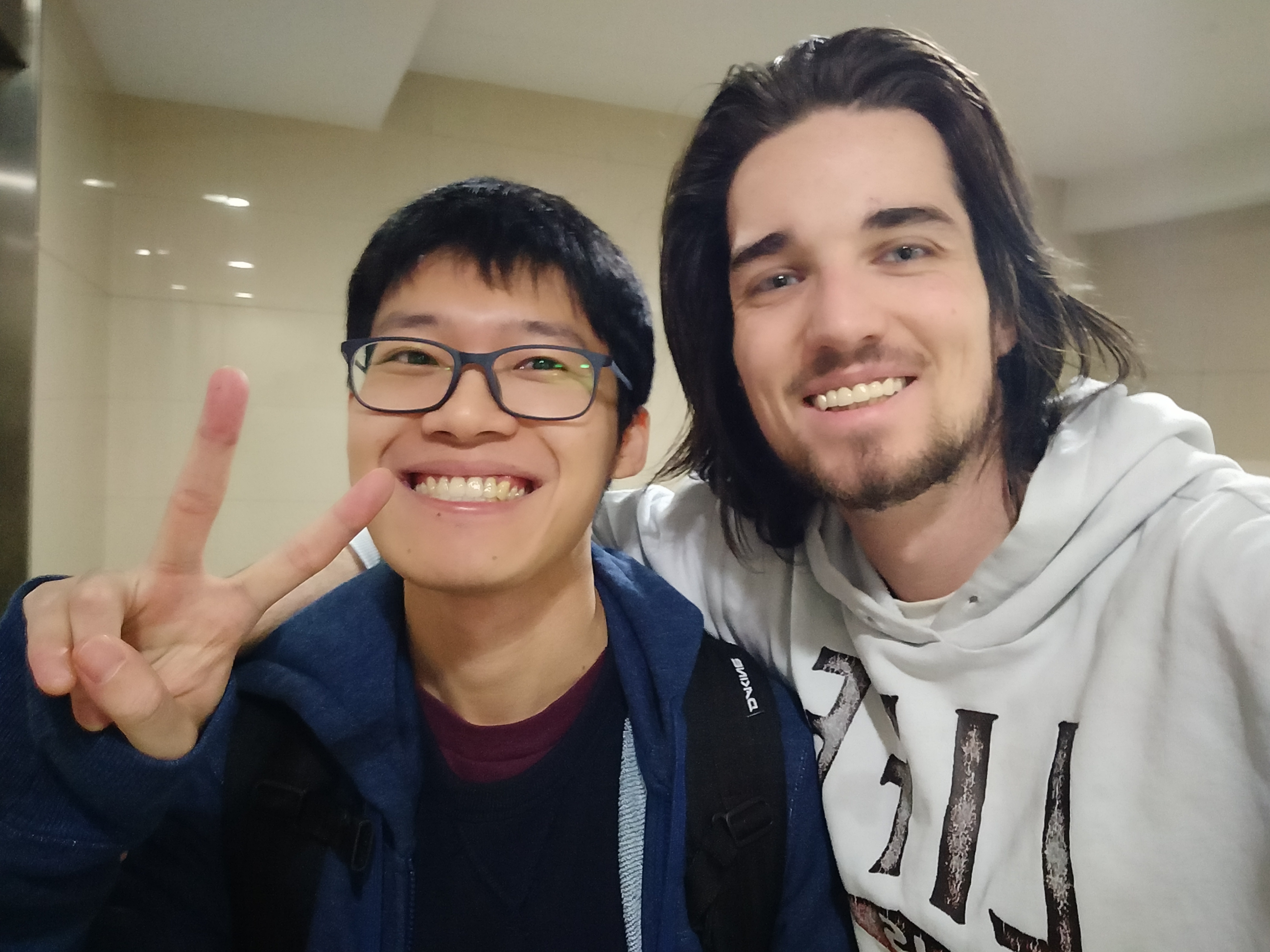 I had three roommates in my time at Beijing. The first was 俊武 (Junwu). We only had about a month together, but he helped me set up my new phone number and deal with my bank, for which I am eternally grateful. 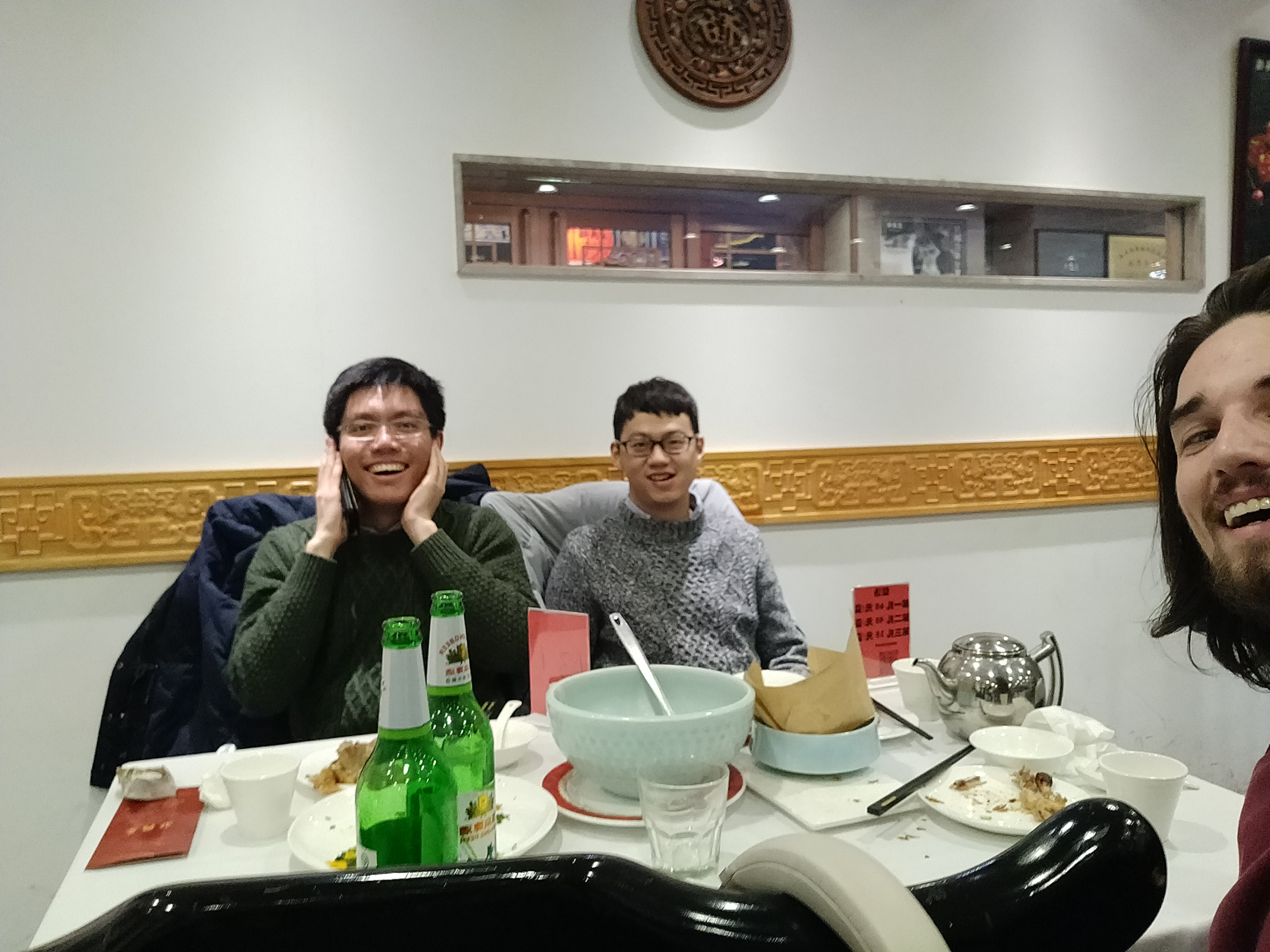 The second was 智达 (Zhida), who I spent the majority of my internship with (the one on the left - on the phone 😂). A real workaholic, I never saw him take a single day off (not even a weekend). 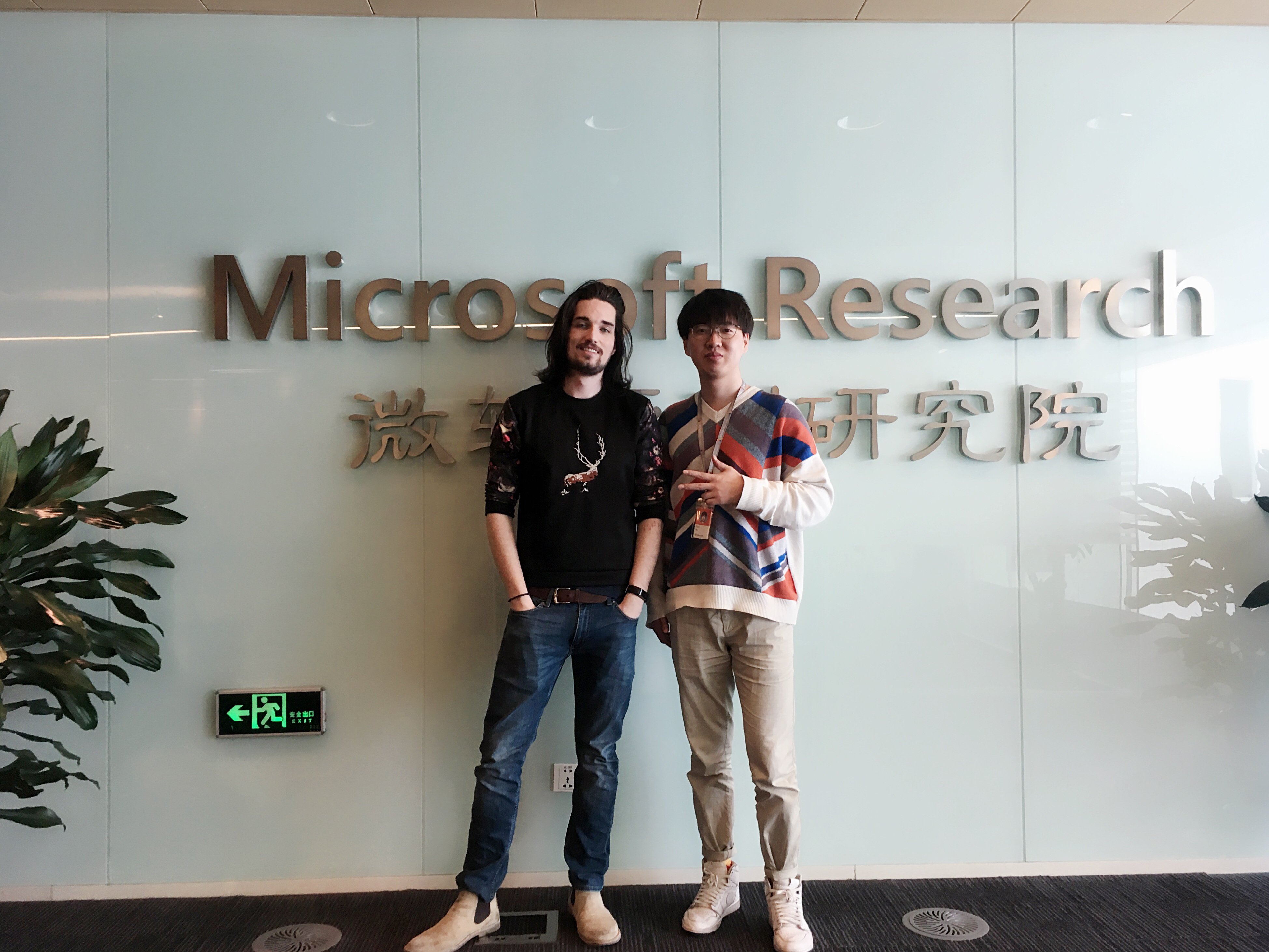 The third was 玛涛 (Matao). We only roomed for about two weeks at the end, but he was my first roommate who I was able to carry on a real Chinese conversation with 😁

Food delivery is convenient, but getting food while out and about is just as easy. There are restaurants everywhere - no matter where you are there’s always something to eat within a block of you. There are street vendors peddling sweet potatoes and Chinese sausage, there are mom and pop hole in the wall restaurants which don’t show up on the maps app, there are more shopping malls in this city than I could possibly visit in a year, all stuffed with restaurants, there are the small stands with delicious snacks like 煎饼 (jianbing “fried tortilla”) or 烤冷面 (kaolengmian “roasted cold noodle”), and failing all else there is always a convenience store. 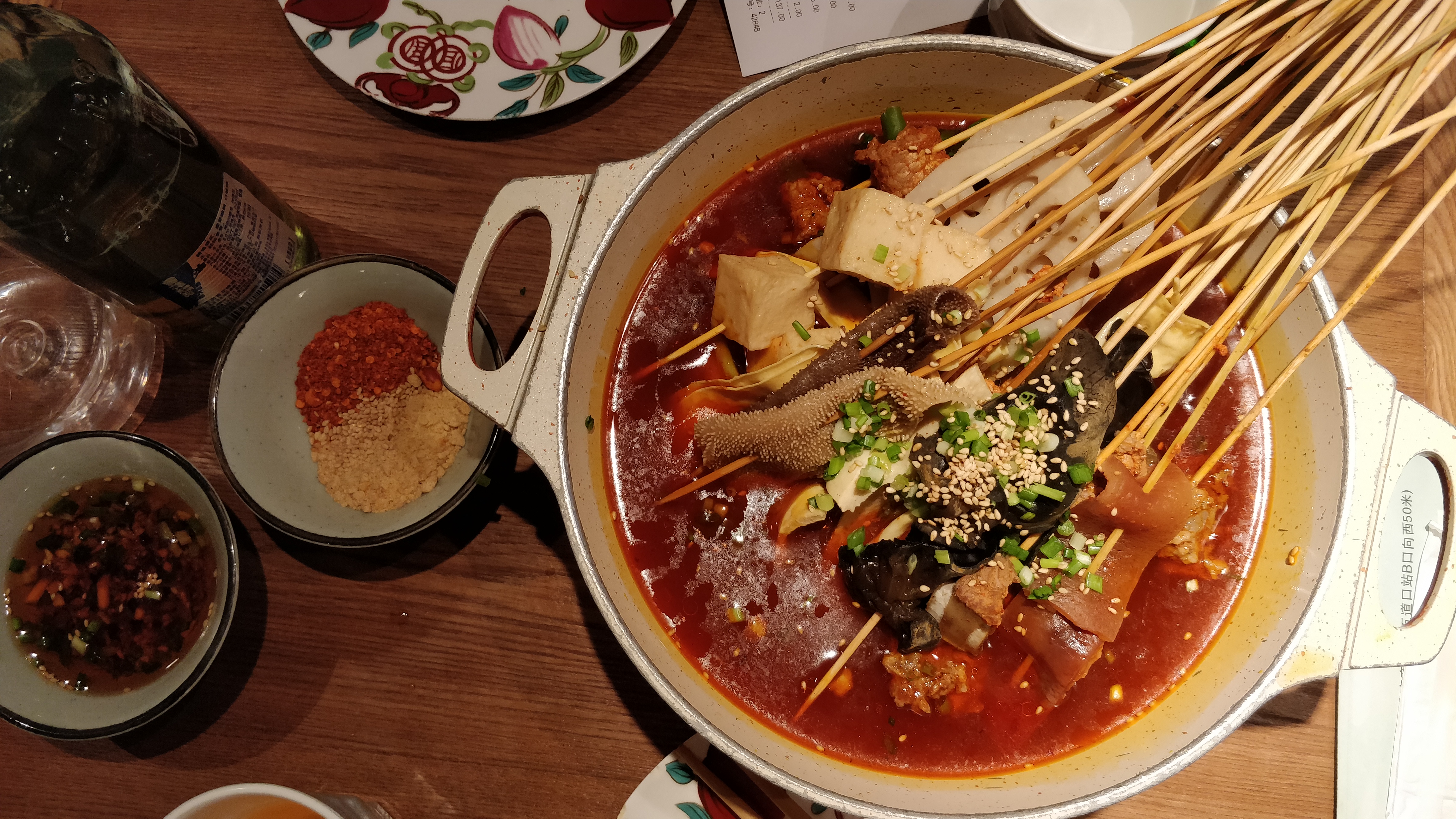 The convenience stores here (and in the rest of East Asia) are miles ahead of their American counterparts. They feature the normal array of snacks and necessities, but most also have a tiny-little takeout section where you can order a bento box of different entree options. Or you can buy an instant ramen and ask them to cook it for you, then eat at the counter in the store. I’ve even seen people set up their laptops in there like a coffee shop. You could eat all three meals a day just at convenience stores, and come lunch every weekday there’s always a line of people queueing out the door. 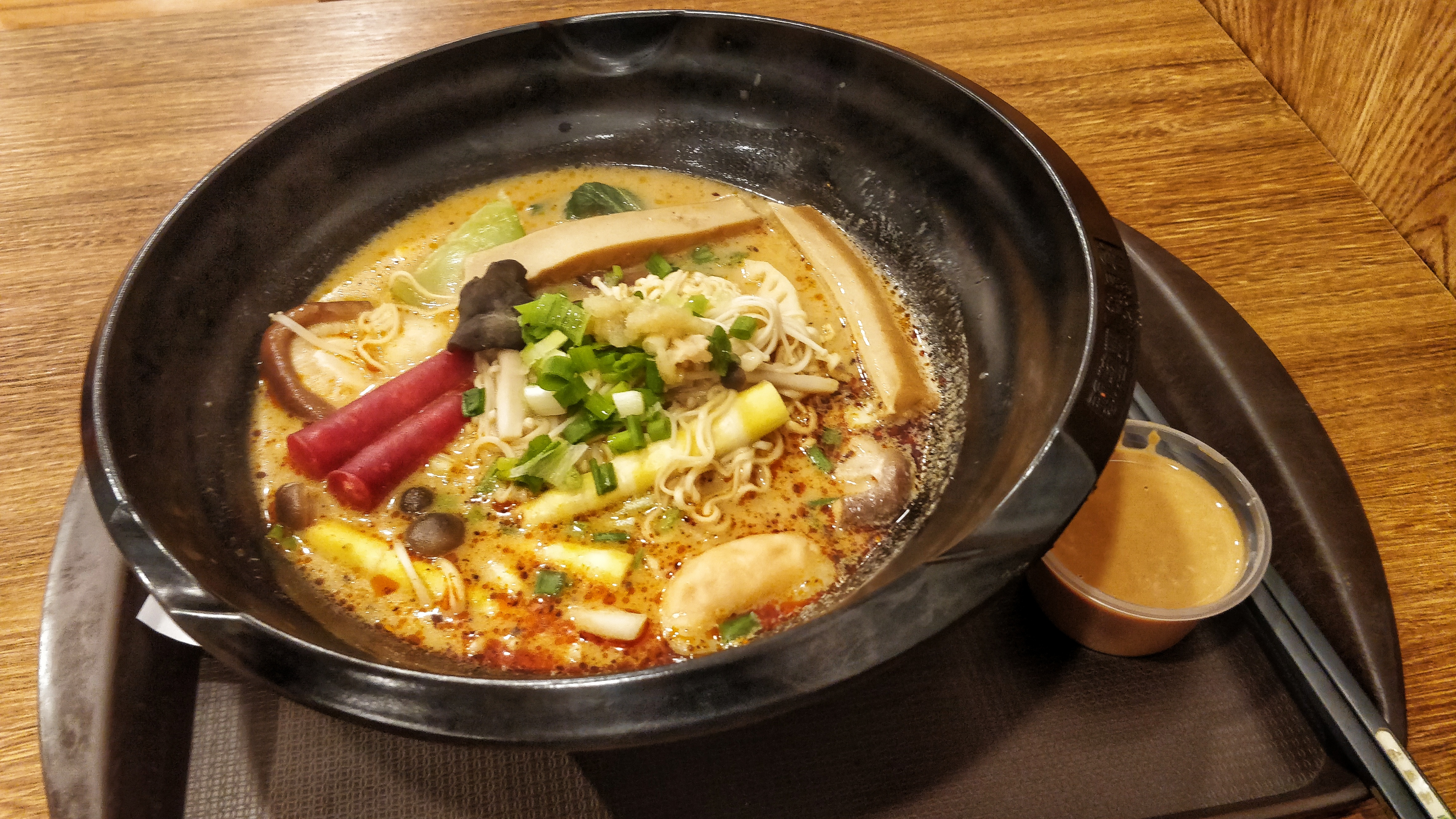 Eating out in general is great. You never have to bus your trash. It’s been drilled into me since I was young that at a fast food place you bus your own tray, but in China you can just get up and walk out. People don’t even push in their chairs. I know it doesn’t sound like much, there’s a sense of freedom in just getting up and walking out without any post meal hassle. Additionally, China is the king of consumer choice. With bars being the sole exception, you can bring any outside food or beverage into any eating establishment I’ve visited. Bring alcohol from the convenience store to drink with your dinner? Sure no problem. Bring a competitor’s milk tea into a boba place to chill with your friends? Not an eye batted. I’ve seen people bring whole meals from other restaurants - so long as they buy something at the restaurant they’ve chosen to sit in no one complains. 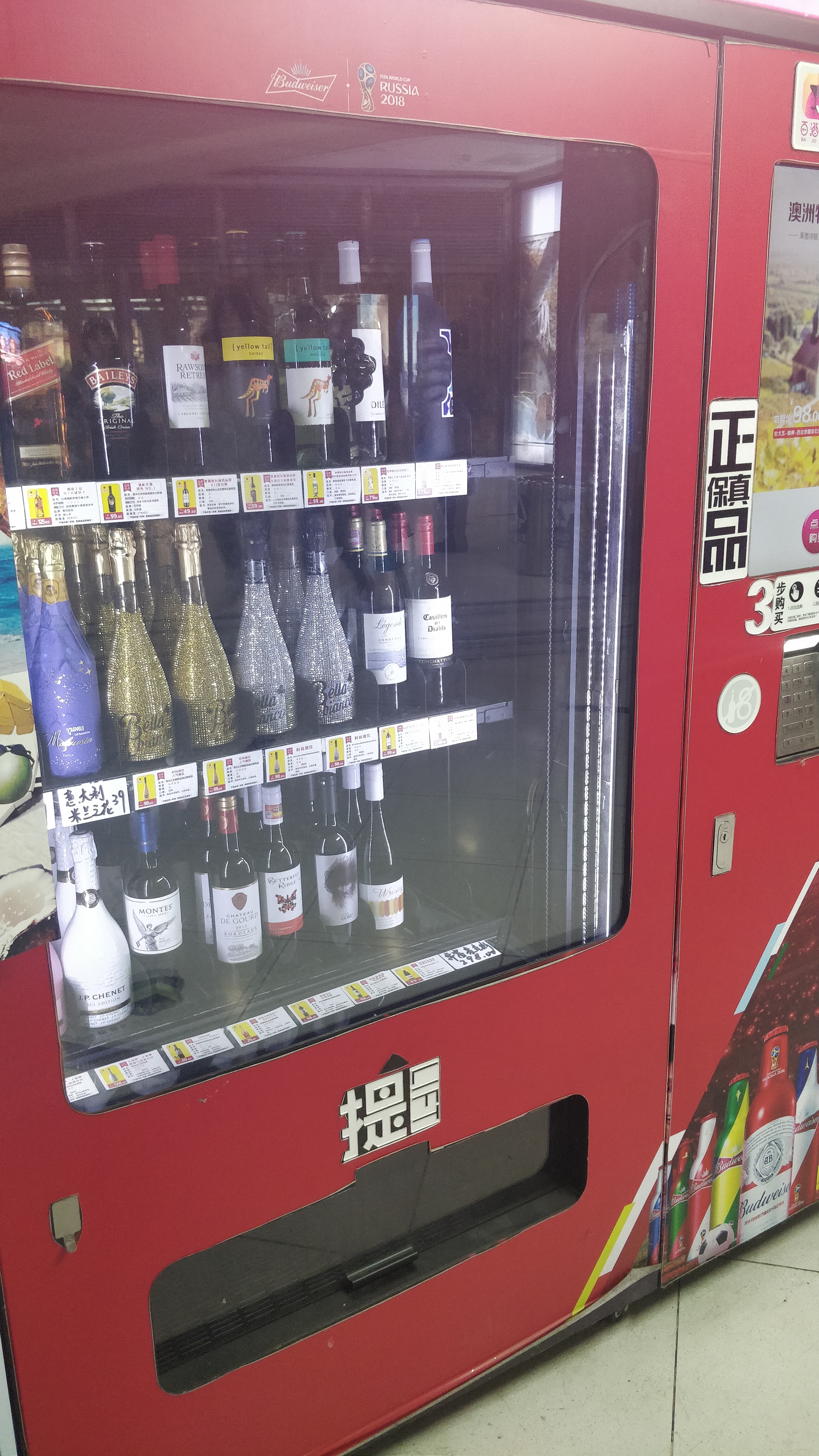 They are very relaxed about alcohol here - anyone, even a kid, could have walked up to this machine and bought some hard spirits.

You can’t bring alcohol into a bar, but other than that the restrictions on alcohol are very relaxed. Very relaxed. The first time I went to a bar I brought my passport - what a fool. I have never once been carded at any bar, restaurant, grocery store or convenience store where I’ve bought alcohol. In fact, I’ve even spotted an alcohol vending machine before - an eight year old kid could have walked up and bought a full handle of vodka if they had wanted. Bars obviously don’t like you bringing your own alcohol in - but you can bring it out and drinking alcohol on the street is perfectly legal. I’ve even drunk on the metro before. One of my favorite (and don’t worry - rarely indulged) activities is to buy a cheap tallboy from a convenience store (less than $1USD) and stroll the streets of Beijing in the evening, sipping on my beer.

Beijing can be dirty, it can be smelly, it can be packed - but it’s so convenient. And it’s a feat that I don’t think is replicable in the US, as many of these amenities rely on endless cheap manpower. Besides the portable battery banks. I’d love for those to make their way to the US. One of you lot over in Silicon Valley, get on it please!

Wow, thanks for another great read - keep up the great work. I really enjoyed your comparisons between the east west… marvelous.

Savant or mad genius? Sam continues to surprise us around every turn of this adventure that we call life. Maybe one day we will completely bridge the gap between the east and the west and who knows… maybe this man will be the glue that holds it all together.

Cant wait for the next entry!

Everytime I read Sam’s posts, I feel urges to quit my job. Thanks?