In China, you can use either WeChat or Alipay to pay for pretty much anything. And when I say anything, I mean anything. Restaurants, cafes, department stores, McDonald’s, taxis, convenience stores, even street vendors. Both buyer and seller have QR codes associated with their accounts. Either party can scan the other’s QR, enter an amount of money, hit send (or request), and the transfer is complete. The only time I have ever not been able to pay with my phone is when it comes to the government - tickets to (some) tourist attractions and (one-time) bus/metro cards require cash.

Whether you use WeChat or Alipay is a matter of preference. I got into the habit of using WeChat pay, just because I was often already using the WeChat app anyways (it is primarily a chat app, after all). Both apps have various deals and schemes that try and entice you into using their app, but I can’t understand them so I just stuck with WeChat 😅

Until this past week. Over dinner one night a fellow intern brought up Alipay’s “福 (fu ‘good fortune’) scanning game”, which you could apparently win real money from. Intrigued at the idea of free money, I asked him to show me.

The game is pretty simple. Use the Alipay scanning functionality (which you usually use to scan QR codes) to scan any “福”. It could be on a decoration, you could write it by hand, you could even search for “福” online and scan those. 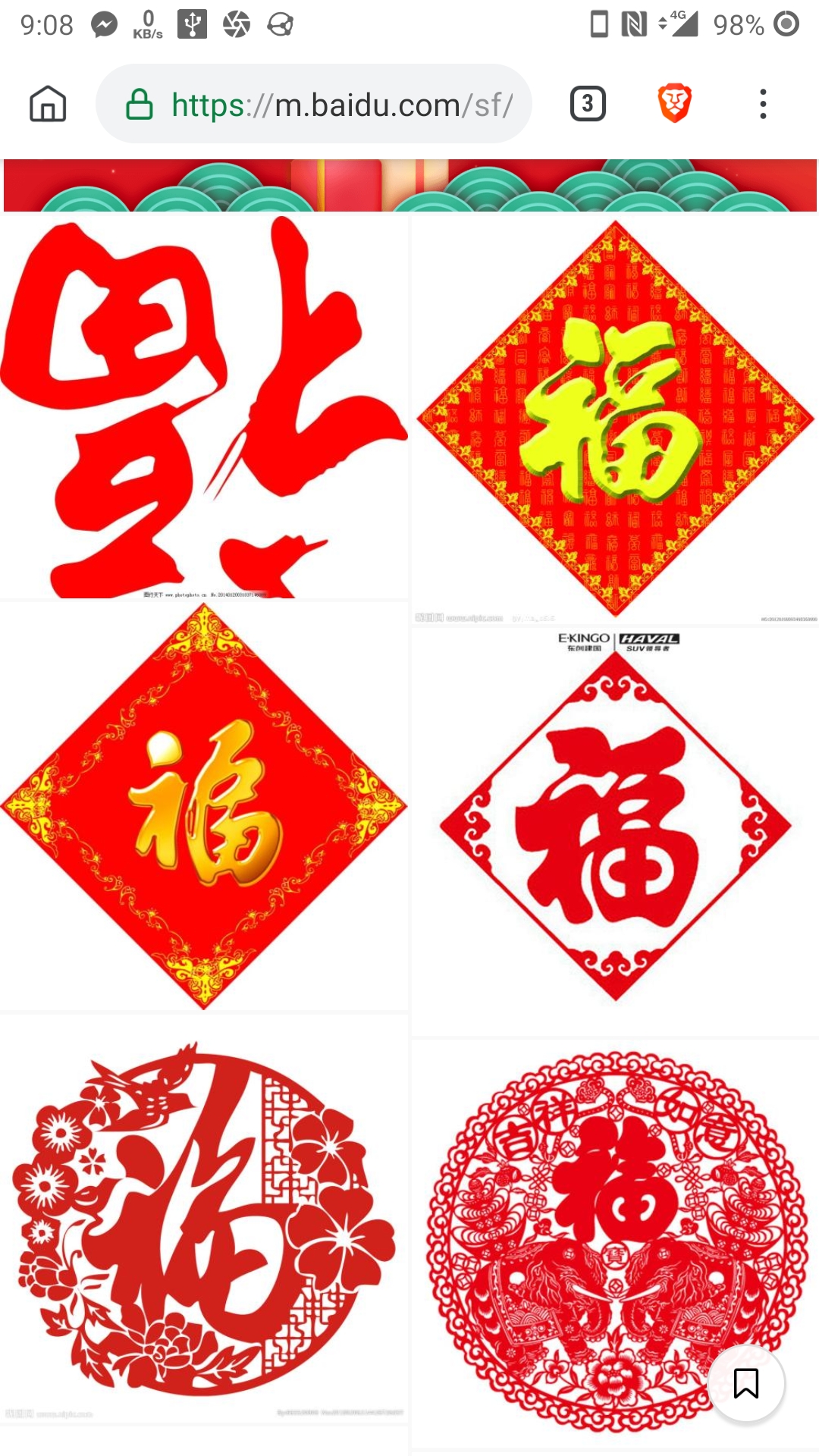 The first page of Baidu's (China's most used search engine) image search results for "福" have got to be the most commonly scanned 福s.

Every time you scanned a “福” you had some chance of receiving one of five types of 福. In order of increasing rarity: 富强福 (fuqiangfu “rich and prosperous”), 爱国福 (aiguofu “love your country”), 和谐福 (hexiefu “harmonious”), 友善福 (youshanfu “friendly”), and 敬业福 (jingyefu “dedicated to work”). If you didn’t receive anything, scan again! A new 福, the same 福, it doesn’t matter. Probably in order keep people from doing nothing but scanning 福 all day, Alipay also restricts the number of scans you can do per day. In my first day I received about fifteen 福s, of which ten were “love your country”. Ironic for a foreigner… 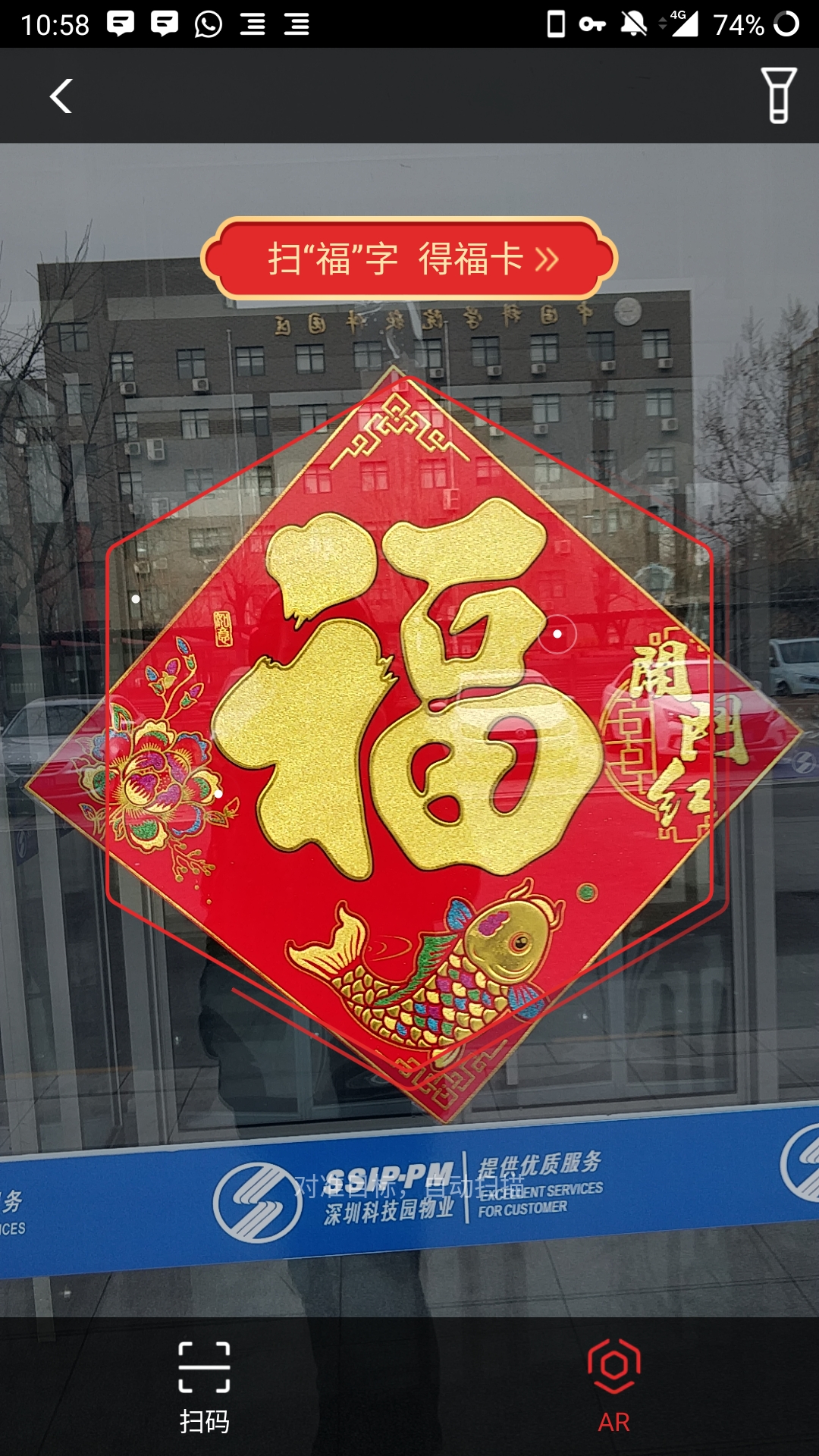 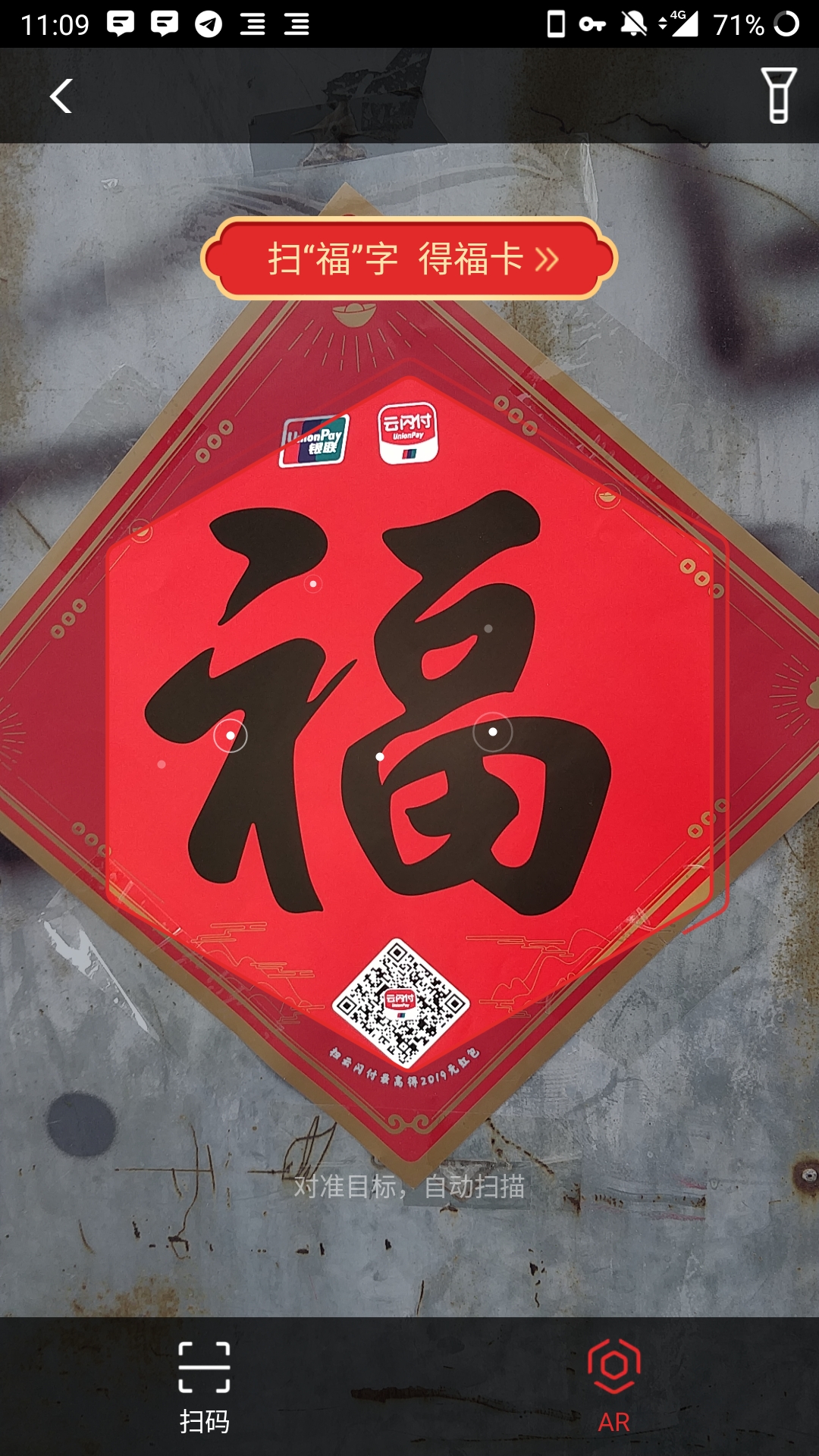 If you collect all five types of 福, then you got to split the pot of 4.5 hundred million yuan (about $67 million) with everyone else who was lucky enough to get all five. Simple!

… Except that you also had to make sure that you scanned a 福 written by Jack Ma, the founder of Alipay, in order to get a special “flower card” that you could use to combine all the five 福s into the winning ticket that you needed to claim the money. 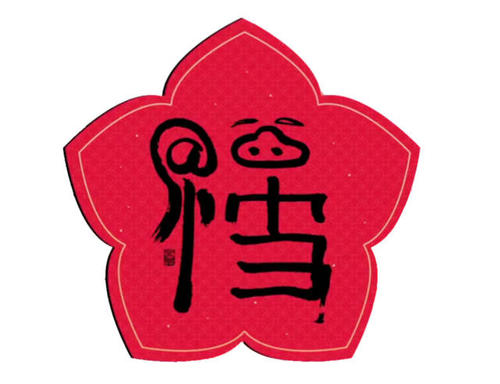 The 福 written by Jack Ma, which you somehow had to know you needed to scan as well.

And there was apparently some UFO game that saw you traveling around the world, collecting additional 福s (which I totally missed). And also there was a chicken that you had to feed every five hours, which would sometimes randomly grant you a 福 when you fed it. 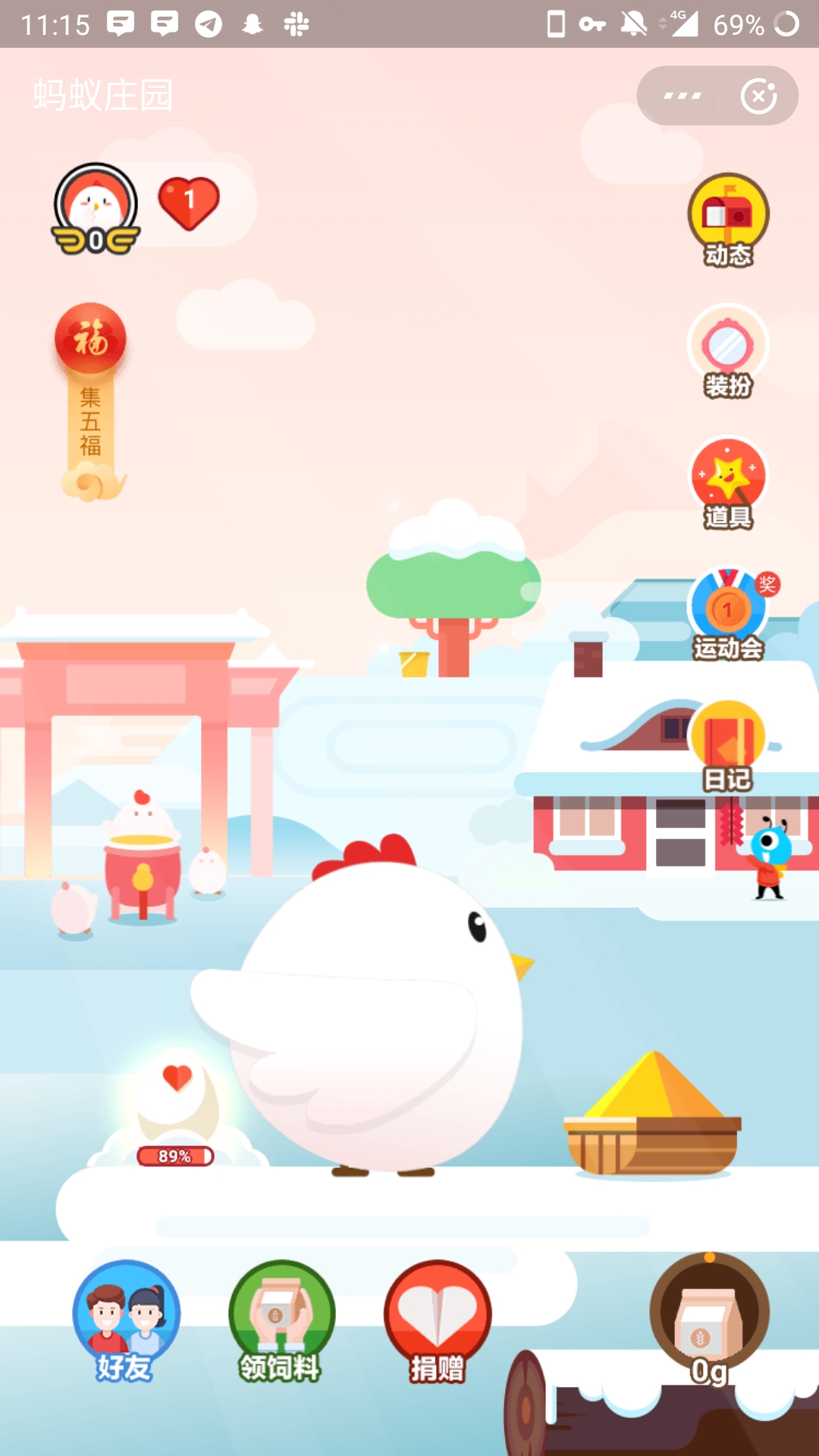 And also! there was a tree, which if you watered, could somehow help you get a “lucky card”. This lucky card would be used to copy a random 福 of one of your friends’. This was more useful than it sounded because some people deleted all their cards besides the rarest one, meaning that if you used the lucky card on that person you were guaranteed the rarest 福. The catch was that you generated water by spending money using Alipay. 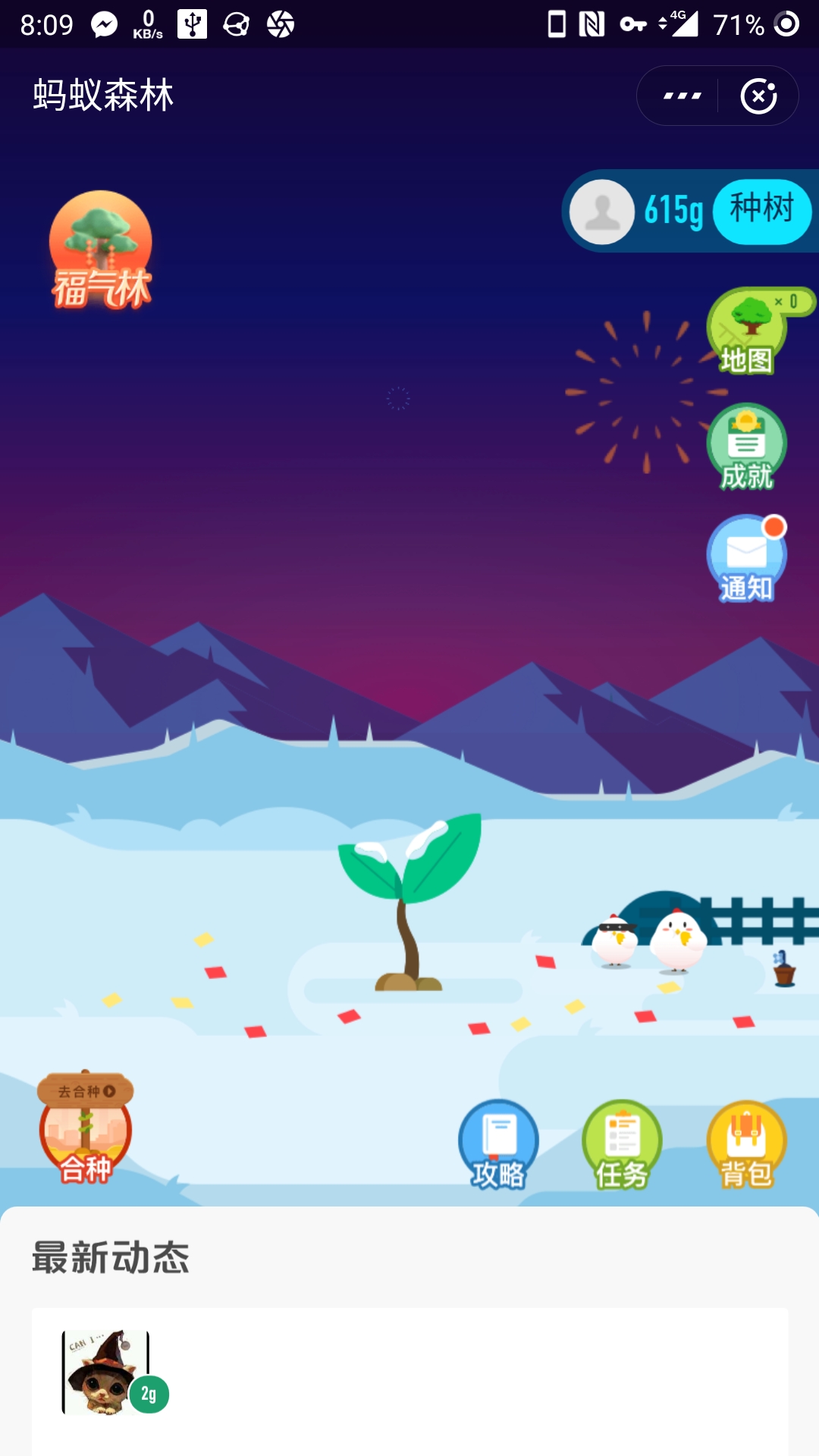 And therein lies the reason why Alipay freely gave away 4.5 hundred million yuan. Because for the rest of that week I used Alipay instead of WeChat for all my payments, desperately hoping to acquire the lucky card.

I didn’t actually known about the chicken and the tree and the Jack Ma 福 until I went to one of the weekly language exchange groups I attend and asked (okay, begged) everyone if I could have their extra 福s. The room exploded and people pulled out their phones to compare 福s. I was amazed - everyone played! And even the couple of other foreigners who had no idea what was going on downloaded Alipay in order to start playing - another example of how Alipay’s stunt worked out for them.

The game is over now and I didn’t manage to collect all five 福s (I didn’t even get the lucky card - or at least I don’t think I did), but my tree remains and I still use Alipay so I can water it. The 集五福 (jiwufu “collect five 福”) is apparently a yearly tradition on the scale of the whole country - according to this article one in every three people in China played (1.39 billion people / 3 = 463 million people 😲 by comparison the US has 323 million people). I don’t know of anything even comparable in the West - perhaps the first time that Google updated it’s doodle to be a game.

My first time playing the game may have been a failure - but you can play from anywhere in the world and next year, no matter where I am, I’m determined to receive my share of the cash 😎